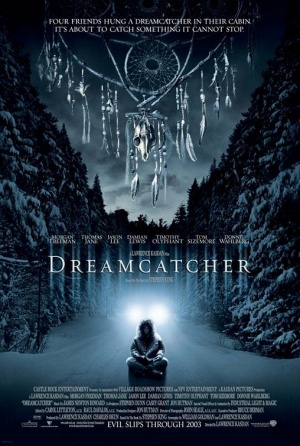 The following weapons were used in the film Dreamcatcher:

After embarrassing a patient at the beginning of the movie, Henry (Thomas Jane) almost shoots himself with a Smith & Wesson Model 19 Snub Nose revolver. Instead, he accidentally discharges it into his diploma on the wall.

Henry with the Model 19 Snub.

An engraved, nickel-plated, ivory-gripped M1911A1 is used by Colonel Curtis (Morgan Freeman) and later by Lieutenant Owen Underhill (Tom Sizemore). Curtis claims it was a gift from John Wayne. Henry (Thomas Jane) is also seen briefly handling the pistol. Fun Fact: This particular pistol went on to be the sidearm of Dean Winchester (Jensen Ackles) in the TV series Supernatural.

Close-up of the M1911A1. In this scene, Underhill charges the weapon and leaves it on the seat - The hammer should be back in this the very next picture.

Colonel Curtis (Morgan Freeman) carries what appears to be a SIG-Sauer P226 in a shoulder holster. In a deleted scene, he is seen pulling it when a soldier attempts to stop him from taking off in a helicopter.

Colonel Curtis (Morgan Freeman) carries what appears to be a SIG-Sauer P226 in a shoulder holster.

In a deleted scene, Colonel Curtis is seen pulling it when a soldier attempts to stop him from taking off in a helicopter.

A Beretta 92FS pistol can be briefly pulled by a truck driver (Ty Olsson) when confronted by Jonesy.

The truck driver (Ty Olsson) with what appears to be a Beretta 92FS.

A Heckler & Koch MP5A3 is used by Lieutenant Owen Underhill (Tom Sizemore) to stop COL Curtis and later by Henry to kill a "Shit Weasel".

Underhill fires the MP5A3 at the helicopter.

Lieutenant Underhill fires the MP5A3 at the helicopter.

Henry fires the MP5A3 trying to hit the "Shit Weasel".

A shot is fired inside the "Shit Weasel".

A Winchester Model 70 bolt action rifle is held by Jonesy (Damian Lewis) while he is hunting and later by Henry (Thomas Jane).

Note: In the book, Jonesy used a M1 Garand instead of a Winchester.

The buttstock on the Winchester Model 70.

Henry inspects the rifle to make sure it is loaded.

The Winchester carried by Henry.

Henry fires the Winchester Model 70 at one of the "Shit Weasels".

Colonel Curtis (Morgan Freeman) briefly uses a Colt AR-15A2 Target with a 24" barrel, free-floating aluminum hand guard, Bell & Carlson thumbhole stock, bipod, and AN/PVS-4 Night-vision scope. This exact same rifle has appeared in several episodes of The Outer Limits, The X-Files, The Sentinel, and a number of other movies and TV shows filmed in British Columbia.

Standard Colt Government Model HBAR, the A2 version of the AR-15 Civilian Rifle - 5.56x45mm (note the lack of a third position for burst mode for the selector switch)

Colonel Curtis with the custom AR-15A2.

Curtis takes aim with the rifle.

Beaver (Jason Lee) can be briefly seen carrying a Ruger M77 rifle when he gets back to the cabin.

Beaver gets back to the cabin carrying the Ruger M77.

Close-up of the rifle.

M16A2 rifles seem to be carried by some of the U.S. Army's 'Blue Unit' soldiers.

The M4A1 carbine can be briefly seen being carried by some soldiers.

A soldier carries the M4.

Another soldier with an M4 while directing a landing.

Impressive muzzle flash when the Minigun is fired.

Another shot of the impressive muzzle flash.