Daylight's End is a 2016 post apocalyptic film set sometime after a mysterious plague has devastated the planet and turned the majority of the world's human population into blood-hungry creatures. Johnny Strong stars in the film as Thomas Rourke, a drifter on a vengeful hunt who stumbles across a band of survivors, led by Frank Hill (Lance Henriksen). Rourke then joins the band to help them defend themselves and to escape to sanctuary.

The following weapons were used in the film Daylight's End:

The sidearm carried by Thomas Rourke (Johnny Strong) is an Colt M1911A1 with extended magazines, at one point with target sights. Frank Hill (Lance Henriksen) uses an engraved one. 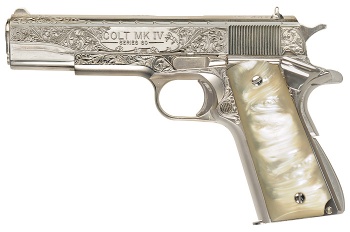 Note the target sights in this scene.

Many survivors, including a hostile survivor (James Yeager) use Glock 17s.

A SIG-Sauer P226 is used by Ethan Hill (Louis Mandylor).

One survivor uses an MP5A3 with a Surefire forend.

The MP5 is the one "firing". Due to the lower budget, this gun is likely an airsoft replica.

A hostile survivor uses a sawed-off Mossberg 500AT.

Rourke with the Double Barreled Shotgun.

Rourke aims with the M14.

Rourke armed with his M14.

Notice that Rourke has switched hands. He shoots with both hands throughout the film.

A hostile survivor uses a M14.

Vlad Romanov (Sonny Puzikas) carries what appears to be an AK-104 with an AKS-74 style side-folding stock and a sound suppressor.

Earnesta (Heather Kafka) ,one of the survivors, uses an MPi-KMS-72.

A hostile survivor (James Yeager) uses an Romanian WASR to shoot at Rourke.

A hostile survivor uses an FN FAL with a ribbed metal foreend and a long flash hider.

Another hostile survivor uses an AR-18.

Harker (Matt Beckham) uses what appears to be an M16A2 with a 20-round magazine.

Bishop (Ed Spila) uses what appears to be an AR-15, customized with an EOTech sight and magnifier combo, as well as a CTR Stock, bipod, and enlarged trigger guard. He loads it with 20-rounder PMags.

Bishop with his Rifle at the ready.

Bishop looks at his remaining rounds.

Many survivors, including Frank and Ethan Hill (Louis Mandylor) use M4A1s, typically with EOTech optics.

Sam (Chelsea Edmundson) with a M4A1.

Both Rourke and Bishop use "Incendiary Grenades", which appear to be the Flashbang Grenade prop from Kaufman's previous film, Sinners And Saints.