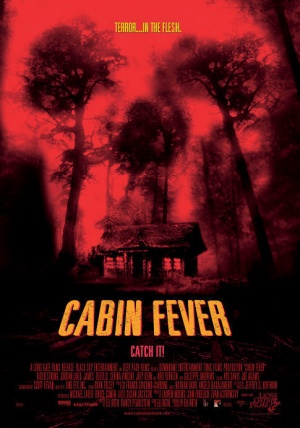 Cabin Fever is a 2002 horror film directed by Eli Roth (Hostel, Hostel: Part II) and follows a group of recent college graduates who become infected with a horrifying flesh-eating virus.

The following weapons were used in the film Cabin Fever:

Tommy (Hal Courtney) uses a M1911A1 pistol while trying to hunt down the teens at the cabin.

Tommy drops his M1911 after being shot.

All of the police officers in the film carry what appear to be Smith & Wesson Model 28 revolvers.

Deputy Winston Olsen (Giuseppe Andrews) gets a statement from Paul. Note the revolver in his holster.

Bert (James DeBello) brings a semi-automatic Ruger Mini-14 to the cabin which gets passed around throughout the film. In the film's remake, it is a fully automatic (!!!) M4 Carbine. How a college graduate could possibly acquire a real military assault rifle is far-fetched to say the least.

Bert with the Ruger Mini-14 and a beer. Not a great combination.

Bert aims the Mini-14 at a squirrel.

Marcy (Cerina Vincent) with the Mini-14.

Jeff (Joey Kern) fires the Mini-14 at the hermit's dog.

Paul (Rider Strong) with the Mini-14 upon finding the hermit's body.

A scoped Winchester Model 70 Featherweight Deluxe is seen hanging on the wall in Cadwell's convenience store.

Old Man Caldwell (Robert Harris) in his store with the Model 70 on the wall behind him.

Tommy (Hal Courtney) uses a Winchester Model 1894 with a scope when an infected Bert shows up at Caldwell's store.

Tommy with the WInchester Model 1984.

Andy (Tim Parati) uses a sawed-off 12-gauge double-barreled shotgun when hunting for the infected teens. Paul also uses it near the end of the film.

Andy with the double-barreled shotgun.

Andy with his shotgun. Note the cut-down stock.

Paul reaches for the double-barreled shotgun.

"Shotgun Casey" (Michael Harding) uses a Mossberg 500 "Persuader" shotgun with wood furniture to scare Paul off of his property.