Body Snatchers is a 1993 science fiction thriller horror film directed by Abel Ferrara and the cast included Gabrielle Anwar, Meg Tilly and Forest Whitaker. The 1993 film is actually the third of four feature films based on Jack Finney's novel The Body Snatchers, which includes 1956's Invasion of the Body Snatchers and its 1978 remake as well as 2007's The Invasion.

The following weapons were used in the film Body Snatchers:

The standard issue sidearm on the base is the M1911A1. Major Collins (Forest Whitaker), Tim Young (Billy Wirth), and Marti Malone (Gabrielle Anwar) all use one in the second half of the film. 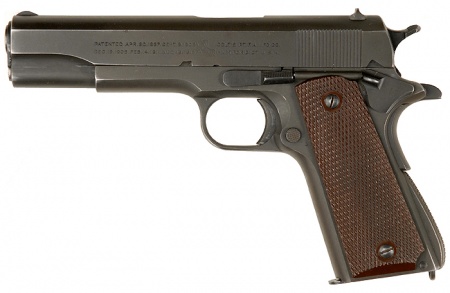 Despite the film taking place on an Army base the M16A1 gets little screen time.

Soldiers march past with M16A1s.

Solders stop Marti after she gets to close to a secure area.

When a trio of soldiers cover the Malones in their escape from the pod people in Sector C, one of them is armed with a Mossberg 500.

In the beginning of the film the Gas Station owner checks the bathroom after Marti (Gabrielle Anwar) is jumped by a paranoid Army deserter.

All of the soldiers stationed at the base wear the patch of the United States Third Army or the "Army of Occupation" which is the Army Service Component Command (logistics). They are headquartered at Fort McPherson and not at the base where the film is set. This was likely done as to keep what unit this is ambiguous. This was also done in the films Harold & Kumar Escape from Guantanamo Bay which had the sexually abusive Guantanamo Bay soldiers wearing the obsolete patch of Army Ground Forces; and Day of the Dead (1985) (Captain Rhodes wears the patch of the long deactivated 99th Infantry Division).

All soldiers in the film wear the patch of the United States Third Army.
Retrieved from "https://www.imfdb.org/index.php?title=Body_Snatchers&oldid=1336871"
Categories: