The following weapons were used in the film Bandidas:

The Single Action Army is seen used by several characters in the film including Sara Sandoval (Salma Hayek) and María Álvarez (Penélope Cruz).

A Smith & Wesson New Model No.3 is used by María Álvarez (Penélope Cruz). 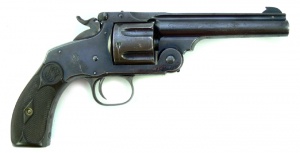 Both girls in one moment at each other aimed with their weapons.

María Álvarez with a Colt New Service revolver in her hand.

A nickel Remington 1875 with pearl grips is used by Tyler Jackson (Dwight Yoakam).

Tyler Jackson with a pair of Remington 1875 revolvers with pearl grips in the holsters on his belt.

Some Jackson's regulators (Joseph D. Reitman) have also Remington 1875, but with wooden handle.

Sara pulls on Bill this weapon when she wants forced his, to teach she to shoot!

Sara inserts a revolver into holster on her belt. 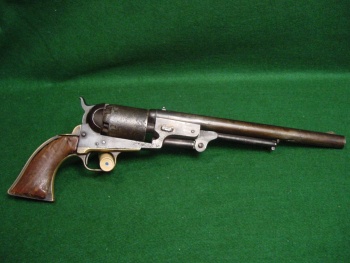 3rd Model Colt Dragoon with a long barrel, note the longer forcing cone and increased cylinder spacing from the barrel compared to the Walker used in the film.

The smaller forcing cone and cylinder spacing identifies it as Walker

Quentin (Steve Zahn) is armed with a Enfield No. 2 revolver.

Quentin (Steve Zahn) during a train robbery holds Enfield No. 2 revolver in his hand. 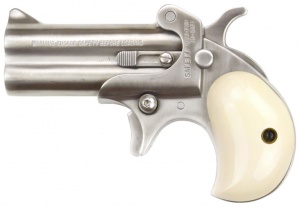 Most regulators and also Mexican soldiers are armed with Winchester 1873 rifles.

Some regulators are seen also with Winchester 1873 short rifles.

Jackson's regulators are walking down the street with Winchester 1873 short rifles.

On the left and also right side are seen Jackson's regulators with this rifles in hand.
Retrieved from "https://www.imfdb.org/index.php?title=Bandidas&oldid=971078"
Categories: