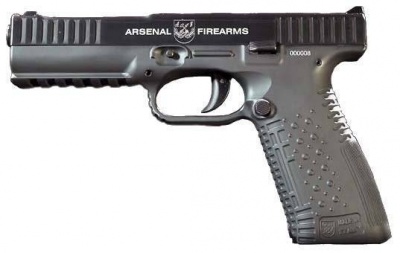 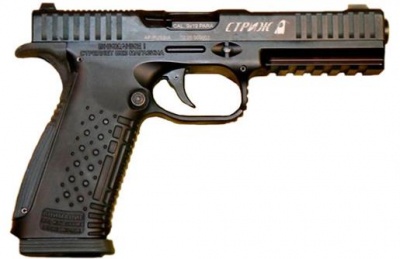 Strizh - 9x19mm. The current version of Arsenal Firearms Strike One is very similar to the Strizh pistols, but with some minor differences in details such as different iron sights. 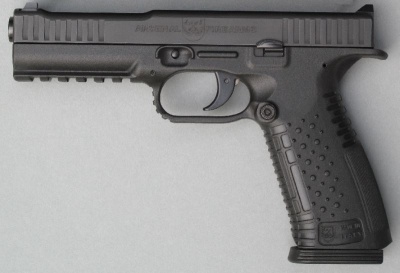 The Arsenal Firearms AF-1 Strike One, also known as Strizh (Стриж, Swift bird) in Russia, is a semi-automatic pistol by Russo-Italian company Arsenal Firearms, using an unusual patented locking system based on the Bergmann system. Originally designed for Russian military/law enforcement, it saw testing for adoption (and some intense discussion in the Russian military scene about it), but was rejected and buried after a series of behind-the-scenes political shiftings. The Strizh was supposed to be produced in Russia, but the production plans were shelved after its rejection, and only the Strike One was produced in EU factories for export.

The Arsenal Firearms Strike One and variants can be seen in the following films, television series, video games, and anime used by the following actors: 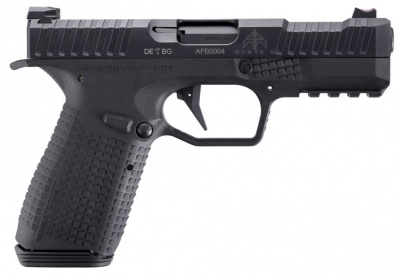 In the United States, a variant of the pistol intended to replace imports and sales of the Strike One in the US is produced by a collaboration between Arsenal Firearms and Salient Arms International. Originally, Prime Ammunition was also involved, and the collaboration was known as Prime Manufacturing Group, but Prime Ammunition left and the collaboration became Arsenal Firearms USA. This variant, originally known as Stryk, features a new slide, new trigger, and a new grip texture, with two variants: the full-sized Stryk-A and the compact Stryk-B.

A "potential trademark dispute" (most likely with the US arm of Bulgarian manufacturer Arsenal Inc) saw Arsenal Firearms USA rebranding itself as Archon Firearms and the Stryk-B pistols being rebranded as Type B in 2018, just as the first shipment of Stryk pistols were delivered to the US and causing another delay due to having to rebrand the slides. Stryk-B pistols launched later in the EU market however were not rebranded, adding to the mess of names. Stryk-A seems to have disappeared when PMG was dissolved.

The Arsenal Firearms USA Stryk-B and variants can be seen in the following films, television series, video games, and anime used by the following actors: