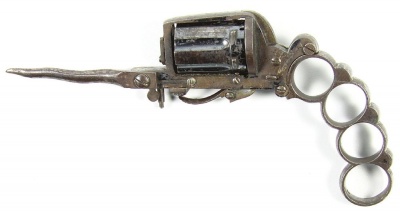 The Dolne Revolver, better known as the "Apache Revolver", is a 19th century multi-purpose pepperbox revolver that incorporates fold-over knuckle duster and a foldout knife, allowing it to be used as either of the three weapons (the trigger also folds up when not in use). The knuckle duster serves as the gun's grip when it is unfolded, and the cylinder and the brass knuckles act as the handle for the knife when the blade is unfolded. The gun lacks a barrel, giving it an abysmal effective range, but greatly improving its concealability.

The origin of the "Apache" nickname is unknown. Supposedly, the name is derived from Les Apaches, a name given to loosely-organized gangs of criminals, muggers, thieves, and other hoodlums whose exploits captured the imagination of early 20th century Paris. Claims that Les Apaches are credited with using and even inventing the revolver became known only by the beginning of the 20th century. On another note, Dolne's revolvers are mostly expensively finished, and, coupled with dubious combat characteristics, would be an unlikely choice of weapon for a poor bandit (who, in reality, were mostly armed with ordinary knives, cudgels, and knuckle dusters). So the Dolne revolver itself is just an example of a popular self-defense weapon at one time (along with the more familiar pepperboxes), and this nickname is most likely nothing more than someone's marketing invention to increase popularity among collectors.

The Apache Pepperbox Revolver and variants can be seen in the following films, television series, video games, and anime used by the following actors: