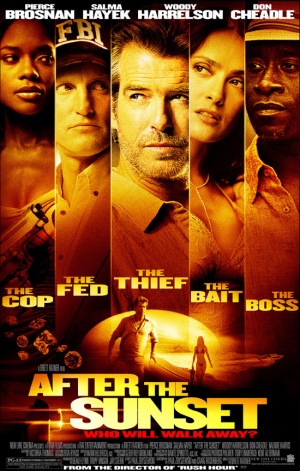 The following weapons were used in the film After the Sunset:

One of the FBI agents at the Lakers game during the opening has a SIG-Sauer P226. Another FBI agent uses one when checking if Stan still has the diamonds.

In the lower right hand corner of the screen, the agent's P226 is visible.

Sophie (Naomie Harris), a Royal Bahamas police officer, carries a SIG-Sauer P228, as identified by Max's girlfriend Lola Cirillo (Salma Hayek), who identifies it by name as a P228, prompting Sophie to tell her it has a custom trigger as well.

Sophie with her P228 in her holster.

Sophie aims her P228 at the masked burglar on the cruise ship.

FBI agent Stan Lloyd (Woody Harrelson) carries a Smith & Wesson Model 19 Snub Nose throughout the film. At one point, it is confiscated by Royal Bahamas police officer Sophie (Naomie Harris) who tells him she has to register it.

Stan fires his Model 19 Snub through the windshield of the Suburban when Max locks him inside.

Stan pushes his Model 19 against the radio when Max turns it on remotely.

Stan inside the Suburban with his Model 19.

Stan fires his Model 19 through the air conditioner.

Stan shoots the shark while fishing with Max.

When Max Burdett (Pierce Brosnan) senses an intruder in his home in the Bahamas, he takes a Smith & Wesson Model 60 Snub Nose out of a plastic bag in his front yard pond and investigates. 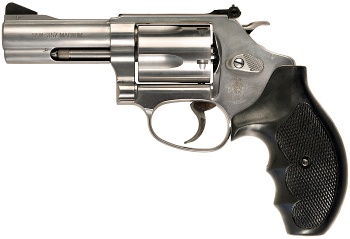 Max and Stan during their standoff inside Max's living room.

Henri Moore (Don Cheadle) carries a Smith & Wesson 3913, which Lola knocks out of his hand.

Henri threatens Max by holding Lola with his S&W 3913.

Henri shows Max a different angle of his handgun.

The guard draws his Beretta on the burglar.

One of the cruise ship guards carries a Glock 17.

The guard fires up at the A/C vent where Max is hiding.

The guard with his Glock behind the night shift guard.
Retrieved from "https://www.imfdb.org/index.php?title=After_the_Sunset&oldid=1550303"
Categories: