A Colt Is My Passport

A Colt Is My Passport (Japanese: 拳銃は俺のパスポート; Koruto wa ore no pasupooto) is a 1967 Japanese crime movie.

The following weapons were used in the film A Colt Is My Passport:

A Beretta Model 70 is Shûji Kamimura's (Jô Shishido) firearm of choice. One of Shimazu's thugs fires a Beretta Model 70 during the final shootout. Shun Shiozaki (Jerry Fujio) holds suppressed Beretta Model 70 on the movie poster and promo shots, but not in the actual film. Note that the Beretta has a cross-bolt safety that was used only for a short time before is was replaced with a thumb-activated frame-mounted safety that is seen on most Model 70s.

Shûji pulls his Beretta at the shooting range.

Shûji holds the Beretta during the final shootout.

A thug (2) aims his pistol during the final shootout. 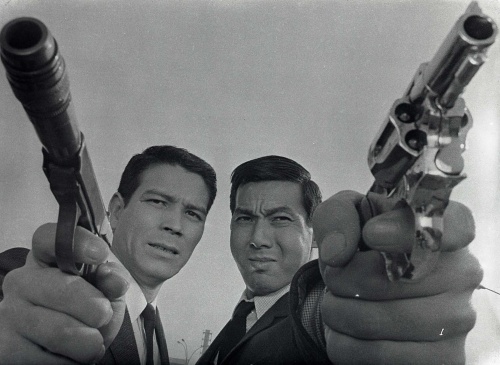 Shun Shiozaki (at the left) aims his Beretta in a promo shot. Shûji (at the right) aims a Smith & Wesson. 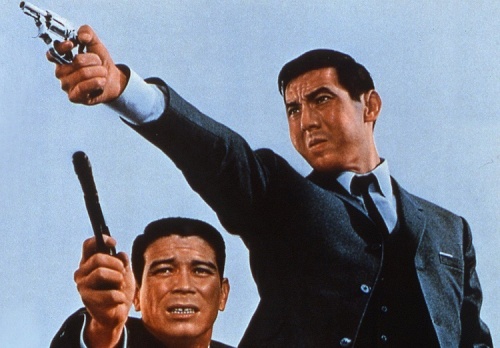 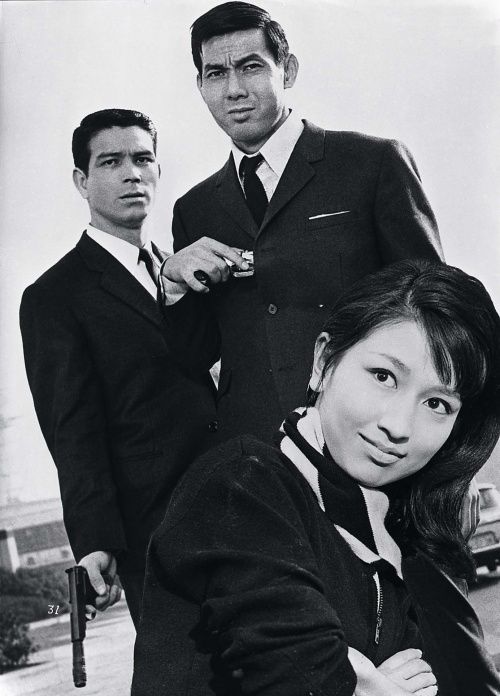 Shun Shiozaki (at the left) holds the Beretta in a promo shot.

Miyoshi (Akio Miyabe) uses a heavily customized Luger P08 throughout the movie. It's obviously a replica, likely a Japanese Modelgun.

Miyoshi checks his Luger at the film's beginning.

A perfect view of the barrel.

...and fires it at the shooting range. The jointed arm does not move when the pistol fires, so the muzzle flash is a typical flashpaper effect.

Miyoshi aims his Luger during the final shootout. It's impossible to attach a scope in such a way on a real Luger, as it would prevent the action from properly working.

Another view of the same scene. Note that the "cylinder" lacks any chambers.

A slightly different view of his pistol.

The thug fires his pistol.

The hitman pulls his pistol...

...and attaches the suppressor.

The hitman attaches the buttstock to his pistol.

The hitman runs, pistol in hands.

The hitman fires his pistol.

A thug (1) aims his pistol during the final shootout.

...and drops his pistol.

The grip of Chisaki's pistol is seen from the left...

The rear part of the pistol is seen.

The pistol is seen at the top, center.

Shûji Kamimura (Jô Shishido) holds a Smith & Wesson Model 10 Snub Nose on the movie poster and promo shots, but not in the final cut.

Shûji (at the right) aims a Smith & Wesson on the promo shot. Shun Shiozaki (at the left) aims his Beretta.

Note the lack of hammers.

Shûji Kamimura (Jô Shishido) arms himself with a Browning 12 Gauge O/U Shotgun during the final shootout.

Shûji grabs the shotgun from the bag...

Shûji holds the shotgun during the shootout.

The rifle is disassembled.

Shûji grabs parts of the rifle...

A close view of the mag's port.

A good view of the inserting mag.

During firing scenes, Shûji's Stirling Model 20 turns into a Howa M300. One of Shimazu's thugs fires a Howa M300 during the final shootout. Miyoshi (Akio Miyabe) fires a Howa M300 to check the bulletproof glass. It is wrongly stated to be chambered in .45 caliber during this scene.

Tsugawa's servant (Chigusa Takayama) holds his rifle at the left. Miyoshi fires a double barreled shotgun at the center.

Another view of the rifle in Miyoshi's hands.

A perfect view of the front part...

A thug fires the rifle...

Numerous guns can be seen in the shooting range armory.

At least three rifles or shotguns and at least three Nambu/Luger type pistols can be seen at the background.
Retrieved from "https://www.imfdb.org/index.php?title=A_Colt_Is_My_Passport&oldid=1536958"
Categories: