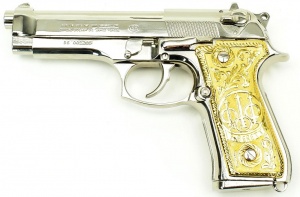 Some of the MI6 operatives at the start of the film are seen using Penn Arms Striker-12 shotguns fitted with modernized and tactical parts.

The second operative holds a Striker with a railed forend and a modern stock.

The CZ Scorpion Evo 3 A is seen in the hands of Luke Hobbs (Dwayne Johnson), Deckard Shaw (Jason Statham) and Margarita (Eiza González). The latter identifies the weapon as "Scorpion Evo 3".

Some of Brixton's operatives are seen with modernized FÉG NGM-81 rifles with FAB Defense furniture at the start of the film.

A Heckler & Koch HK416D is seen in Hattie's arsenal. The weapon is also used by the airport security.