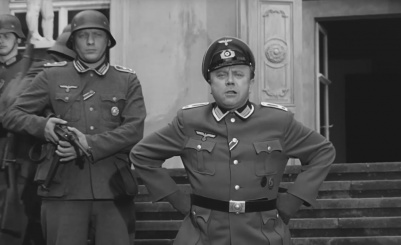 Werner Peters (July 7, 1918 - March 30, 1971) was a German theater and film actor and voice actor. He achieved great fame through his role as the opportunistic protagonist Diederich Heßling in the 1951 DEFA film classic Der Untertan - a film adaptation of Heinrich Mann's novel of the same name. At the beginning of his acting career, he appeared in several East German films. In the middle of the 50s, he moved to West Germany. There, he appeared in four Dr. Mabuse and four Edgar Wallace films, as well as in the 1961 Johannes Mario Simmel film Es muß nicht immer Kaviar sein. But he also had roles in international film productions; like in the 1965 war movie Battle of the Bulge. Peters also found time to lend his distinctive voice as a dubbing artist to various actors in international films. In the 1963 dubbing of the classic The Third Man, he voiced Orson Welles. He also lent his voice to Rod Steiger, Walter Slezak, Mickey Shaughnessy, George C. Scott, Donald Pleasence, Van Heflin, Dan Duryea, Ernest Borgnine, Jack Carson and many others.

During the premiere tour for his last feature film Angels of Terror (Die Tote aus der Themse), he suffered a heart attack in Wiesbaden at the end of March 1971, from which he died at the age of 52.