Your screenshots are set to 4:3

Good work, but please no png's

Good work on changing your screenshots, but please upload them as JPG's only. PNG's, while sharper, cause the servers to slow down. You can use a program like Fast Stone Image Viewer to convert your PNG's to JPG's as well as renaming them and cropping the black bars if necessary. Thanks. --Ben41 06:16, 26 June 2010 (UTC)

Not all of the marines have M1 Garands. There are more guns in that movie than you think. I wouldn't think that marines would only be armed with just M1 Garands so I suggest you look into that movie again and try to find more. - Kenny99 18:42, 26 June 2010 (UTC)

We're getting to the point of too many screenshots for "Band of Brothers" (There are now over 40 screenshots for the M1 Garand alone!). Please try to limit any future screenshots to either featuring a prominent actor in the series or to point out a particular feature of a weapon. --Ben41 06:41, 2 July 2010 (UTC)

To Hell and Back

Please use other coding for images other than by what weapon is in the photo. Also there is no need to replace every photo on the page unless yours are vastly superior to those already up. Then just replace instead of deleting and changing the entire page to fit your needs. --phoenixent 00:19, 19 August 2010 (UTC)

Kenny99 changed it back, but you undid my correction to your screenshot size. At 800px they are too big, perhaps not for some systems set up for gaming, but to most standard monitor screen settings, which is why IMFDB rules state that if full screen shots, then they are 500px wide and widescreen, they are 600px wide. Kenny99 was correct and he noted the rule about IMFDB screen shot sizes. MoviePropMaster2008 07:33, 5 September 2010 (UTC)

Letters from Iwo Jima Your screenshots are set to 4:3

It appears that your screenshots are squashed again. Make sure that your media player is set to 16:9 and reupload in the correct aspect ratio. Thanks. --Ben41 08:10, 15 September 2010 (UTC)

Good work on the The Young Lions page, but be sure to add the categories at the bottom when you start the page. Otherwise you have an orphan page. I went and added them. Also I changed the title. If the title starts with The then move it to the back of the title. A couple years ago one of the original mods had to edit hundreds of titles that began with The. I also made that change. --Jcordell 13:51, 15 October 2010 (UTC)

NICE page on Days of Glory

But being a film that most IMFDB users are not familiar with, how about a brief summary about the film at the top of the page?MoviePropMaster2008

Please adhere to the rules regarding excessive number of screenshots

On Kokoda, you have way too many shots of the same firearm. Please cut them down or a MOD will do it for you. Also if you cannot convert your previous PNGs to JPEGs, again, a mod will do it for you. Great work so far, but please read the rules of IMFDB, there may be some small details you may have missed. MoviePropMaster2008

Your Anzac Screenshots are set to 4:3, do you need help with this issue?

this is not the first time an IMFDB member has pointed out that your screenshots are squashed. If you need help, please ask for it. If not then we must assume that you like it that way, however, aesthetically it blows. MoviePropMaster2008

Sorry. Let me try again, so your ORIGINAL COPY apparently is in 4:3. Previously I think you were squishing 16:9 images to 4:3 into a vertical squish. Now the OPPOSITE is happening. Since the original is 4:3 by setting your settings to 16:9 all you're doing is stretching and distorting the image so that it looks SQUASHED (WIDE versus TALL). Either way it looks bad. If your original copy is in 4:3 (which most TV shows are and this was an Aussie TV series) then keep the aspect ratio to 4:3. You should match the aspect ratio to the ratio of the film you're screencapping. Now I sometimes clip 4:3 images to 'letterbox it' to make it look a little better but that's up to you if you want to do that. MoviePropMaster2008 04:00, 28 November 2010 (UTC)

You have the WORST luck with screencapping. This time your GREAT RAID images are squished, not squashed. That's because you did not get that your copy is FULL ANAMORPHIC WIDESCREEN, 16x9 and you set your capture to 1:66-1 which is not wide enough. Your images are distorted. Alas they will be deleted until you can figure out how to capture correctly. MoviePropMaster2008 19:01, 3 December 2010 (UTC)

Gotta check on the new widescreen standards again. Will post a new matrix to help everyone with this. MoviePropMaster2008 23:11, 3 December 2010 (UTC)

Where did you get your PIRAHNA screenshots when the movie won't be released until JANUARY 11th, 2011?

Per IMFDB rules you have way too many shots of the rifle in Going Back. Also that rifle is NOT an XM16E1 but an M16A1 (full bulge around the mag release button and a birdcage flash hider). You need to delete some of the pics. Being the author of the page, you have first rights to chose which ones go. Remember that a Mod will pick and delete ones if you don't choose to do so. Thanks for your cooperation. And yes, this is in the rules. :) MoviePropMaster2008 08:55, 16 January 2011 (UTC)

Remember this is your second warning regarding too many screencaps. If you do it again, chances are you will be regarded as a non-cooperative member, and Mods will start deleting your material to adhere to the site standards without consulting you. Please be aware of this. Thanks. MoviePropMaster2008 08:57, 16 January 2011 (UTC)

Kokoda is shown as a television production

You have listed the weapons used in the production under the film headings of the various weapon pages. I moved it to television on the Webley Mk VI and SMLE page. Please make sure you are paying attention to the categories. Thanks.--Jcordell 13:57, 16 February 2011 (UTC)

You've been told before about adding more screenshots to pages that already have a lot of screenshots. When you add more screenshots for various pages like you have, it makes the page extremely labor intensive to scroll through. I don't want to discourage you from putting up screenshots, but there are a lot of other pages that don't have any screenshots that could use some attention. Please, please consider if the screenshots you are putting up are absolutely necessary (such as if you are going to put it on an actor page or if you are going to point out a particular feature of the weapon that's not already mentioned previously). --Ben41 23:12, 19 February 2011 (UTC)

All Quiet on the Western Front

It appears that your screenshots for All Quiet on the Western Front (1930) are not in the proper format. The characters look squashed, which means that you've set your media player to 16:9 when it should be 4:3 (older B&W movies are usually in this format). You can use Photoshop or Fast Stone Image Viewer to "Resize and Resample" (in the Edit toolbar) your screenshots into the proper format. --Ben41 04:34, 27 June 2011 (CDT)

Below is an example: 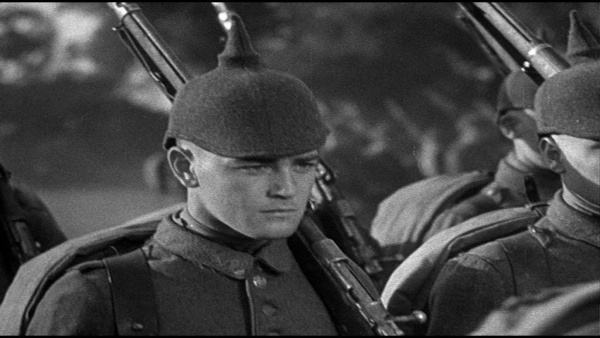 The actor appears squat because this is set to the improper ratio 1024 x 566. 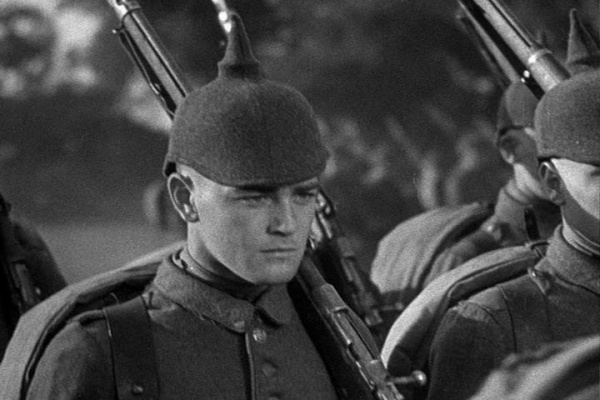 Resized and resampled to the proper pixel ratio of 720 x 480.

Thanks for Project Reality Screenshot

Thank you for adding the screenshot and relevant info for the L7 machine gun on the Iveco LMV on the Project Reality article. I have been having no end of trouble installing the v0.96 and newer patches on my computer (keeps saying that I don't have BF2 v1.50 installed, which I do) so I haven't been able to see the new weapons yet. Your help with the article is greatly appreciated. Orca1 9904 01:08, 23 August 2011 (CDT)

Thanks for help on PR: Vietnam

Just wanted to say thanks for the additional info on the Project Reality: Vietnam page. I plan to fully cap the article as soon as the lag on the download sites dies down enough to me to get it. In the meantime, feel free to list any other weapons that haven't been mentioned yet. Orca1 9904 20:59, 6 April 2012 (CDT)

Before you continue with this page, I have to check with the other admins on whether this title is actually eligible. The site just deleted a page for a 1000 Ways to Die, which was a documentary series that also contained re-enactments that featured handguns. Based on your description, this film also seems to fall under this same category and may be ineligible. --Ben41 04:24, 15 May 2012 (CDT)

I see that you've started to place screenshots on the page. You can go ahead and finish this page, but be advised that this title is still being deliberation (this is being discussed in the forums). I would suggest that you please reconsider doing future documentary pages lest your work be deleted because of ineligibility. --Ben41 00:41, 21 May 2012 (CDT)

I'll try to do it as accurately as possible this site. I hope that you are interested. I come from Polish and I know a lot of the weapons --MTOOO 06:38, 4 September 2012 (CDT)

All Quiet on the Western Front