Those Who Wish Me Dead

Those Who Wish Me Dead is a 2021 American thriller based on the 2014 novel of the same name written by Michael Koryta, who also co-wrote the screenplay. Co-written and Directed by Taylor Sheridan, the film stars Angelina Jolie as Hannah Faber, a smokejumper forced to protect a young boy on the run from a pair of assassins. The cast includes Jon Bernthal, Nicholas Hoult, Aidan Gillen, and Tyler Perry. The film was released theatrically and streamed on HBO MAX on May 14, 2021.

The following weapons were used in the film Those Who Wish Me Dead: 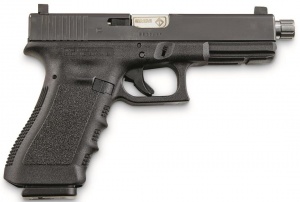 A Glock can be seen holstered on Patrick's belt.

A Glock is used by Jack Blackwell (Aidan Gillen).

Sheriff's Deputy Ethan Sawyer (Jon Bernthal) carries what appears to be a SIG-Sauer 1911 TACOPS as his service weapon. 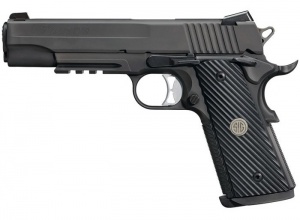 Ethan opens fire after being ambushed.

A PWS MK107 "Diablo" carbine with a mini red dot sight and laser sight/weaponlight combination is the primary weapon used by Jack Blackwell (Aidan Gillen). This particular weapon is the 7.62x39mm version, judging by the magazine.

Jack waits for his target, carbine at the ready.

He opens fire as Owen drives up.

Patrick Blackwell (Nicholas Hoult) uses an AR-15-style carbine in the woods. The weapon is fitted with a variable-power riflescope and PEQ-15 laser.

Patrick holds his weapon as he searches the woods.

Firing from a tree, he opens fire on the watchtower. Note the extended charging handle. The scope has a large "G" on the side, if that helps identify it

Patrick uses an AR-10 pattern sniper rifle in 7.62 NATO during the road ambush.

Patrick holds his rifle as they check out their work. Note the holstered Glock.

Alison Sawyer (Medina Senghore) uses a scoped hunting rifle while fighting the Blackwells. The weapon is not seen very clearly, but appears to be a Blaser R93.