From Internet Movie Firearms Database - Guns in Movies, TV and Video Games
(Redirected from The Negotiator)
Jump to: navigation, search 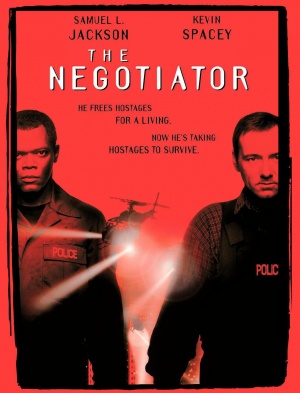 The Negotiator is a 1998 thriller starring Samuel L. Jackson as Danny Roman, a Chicago PD detective who works as a hostage negotiator for the department. When he is framed for corruption and murder, Roman decides to take hostages in the police headquarters in order to clear his name. Kevin Spacey co-stars as Lt. Chris Sabian, a fellow negotiator who is brought in to attempt to free the hostages and end the situation without bloodshed. The film was directed by F. Gary Gray (The Italian Job).

The following weapons were used in the film The Negotiator:

The SIG-Sauer P226 pistol is the unofficial star of The Negotiator, and is used heavily by many characters in the movie. When Lieutenant Danny Roman (Samuel L. Jackson) is accused of murdering his partner as part of a corruption scandal, he takes the accusing Internal Affairs investigators hostage using a P226 that he acquires from one of them during a scuffle. There are several extreme closeups of the P226 where it is easy to see that, as with all prop SIG-Sauer pistols used in Hollywood, the lock-up on the barrel has been filed down in order to make the gun function with blanks. HBT officer Hellman (Nestor Serrano) also carries a P226 which is also briefly wielded by Inspector Grant Frost (Ron Rifkin) near the end of the film. HBT Commander Beck (David Morse) also uses a SIG P226 at the climax of the film.

A close-up of the IAD inspector's SIG-Sauer P226 after Danny has just taken it from him.

Danny Roman (Samuel L. Jackson) talking to a hostage negotiator on the phone while brandishing the P226.

A close-up of the P226 during the first stand-off.

Another extreme close-up of the SIG P226 after Danny has just cocked the hammer; in this picture, it's easy to see that the lock-up has been removed to make the gun function reliably with blanks.

Danny firing the P226 at repelling HBT officers from above...

...and below (he's firing the gun upside down because he's hiding under a desk).

Frost checks the load in Hellman's SIG P226 near the film's conclusion.

Many of the other Chicago police HBT officers throughout the movie also use the SIG-Sauer P226. The two HBT operators who attempt to breach the building from the air are armed with P226s fitted with Surefire 332R flashlight (early model, marked "Laser Products"), both of which are then confiscated by Danny and used later in the film.

A nice close-up of an HBT operator's SIG-Sauer P226, showing the Surefire 332R flashlight beneath the barrel. Note that this particular P226, unlike Danny Roman's gun, has a custom extended takedown lever.

Danny pointing one of the HBT's P226s at Chris Sabian (Kevin Spacey).

Lieutenant Chris Sabian (Kevin Spacey) carries a Glock 19 as his sidearm throughout the movie.

An extreme close-up of the Glock 19 as Lt. Chris Sabian (Kevin Spacey) grabs the weapon before entering the building to negotiate with Danny Roman. Note that the Glock has an open-tipped guide rod which is not part of a captive assembly, indicating that this is an early (pre-1991) Glock 19.

Sabian holding his Glock 19 on Danny.

The masked gunman during a murder also uses a Glock 19 (though in a flashback, it is easy to tell that his Glock is actually one of the flashbulb-firing "Non Gun" Glocks; this is necessary because at the range of the shot, blanks would be harmful to the actor).

A gunman opens fire with what appears to be a Glock 19 (this is actually a flashbulb-firing "non gun" manufactured by ISS for scenes where blanks could not be used safely).

Danny Roman's sidearm early in the film is a Beretta 92FS, which he is forced to surrender (along with his badge) when he learns that he is placed on suspension. Many other Chicago police officers throughout the movie also use the 92FS (including the two who arrest Danny at the scene of a murder).

Danny Roman hands over his Beretta 92FS when he is suspended from duty.

When Danny takes the Internal Affairs investigators hostage in their office, many of the other detectives in the office are armed with a variety of different types of revolvers. Danny forces them to place their weapons on a desk. Among the revolvers seen are various Smith & Wesson models.

Several officers' and detectives' weapons on a desk.

Chicago HBT sniper Palermo (Michael Cudlitz) uses a .308 (7.62x51mm NATO) version of the Finnish Valmet M78/83 semi-automatic rifle. His Valmet is outfitted with a scope and laser sight (which a real-life sniper would never use).

Palermo setting up his Valmet M78 on the roof opposite the federal building. A CGI-enhanced version of this shot appears to have been used in the film Light It Up.

Another view of Palermo with his M78.

Some of the snipers called to the scene of the hostage situation can be seen aiming Remington 700PSS sniper rifles at Danny Roman.

A HBT sniper with a Remington 700PSS rifle.

At the funeral of a fallen CPD detective, an honor guard detail use M14 rifles to perform the rifle volley.

Police officers firing M14 rifles into the air at the funeral.

Hellman uses a suppressed Heckler & Koch MP5SD2 submachine gun throughout the movie. The weapon was taken after an attempted breach since it was used in an officer involved shooting.

Hellman armed with an MP5SD2.

Most of the HBT and FBI SWAT officers throughout the movie can be seen using Heckler & Koch MP5 submachine guns fitted with Surefire weaponlight forearms, mostly (including Argento (Tim Kelleher)) the MP5A2 variant (fixed stock), but also some collapsible-stock MP5A3s.

Another HBT officer with an MP5A2.

Omar (Tom Bower) in the opening standoff is armed with a Winchester Model 1897. The shotgun is taken by Danny Roman (Samuel L. Jackson) when Omar falls on the floor. Danny briefly give it to Nathan (Paul Guilfoyle) to take it away.

Good view of the barrel on the Winchester Model 1897.