From Internet Movie Firearms Database - Guns in Movies, TV and Video Games
(Redirected from The Captain)
Jump to: navigation, search

The Captain is a 2017 World War II German-language drama directed by Robert Schwentke (Red, Flightplan). The film is set in 1945 at the end of the Second World War, as Corporal Willi Herold is hunted down by the merciless Captain Junker, who considers him a deserter. But shortly before his expected death, Willi discovers a car at the roadside containing a medal-captained uniform of the Luftwaffe, which he simply brushes over. After donning the new uniform, he quickly slips into the role of a German officer and soon scattered German soldiers begin to follow his orders, no matter how ridiculous. Willi tests his newly-gained power of disposition with tragic results for numerous prisoners of war. The film was loosely based on actual events.

The following weapons were used in the film The Captain:

Junker tries to shoot running Herold with the P38 while chasing him throughout the landscape.

Inspired by her husband, Gerda takes aim with Karl's Walther to shoot at prisoners.

After failing to hit them, Karl helps to stabilize her aim.

A Walther PP is aquired by Hauptmann Willi Herold (Max Hubacher) from the left-behind stuff of the Luftwaffe. During the execution of P.o.W.s, he hands it to Roger (Samuel Finzi).

Hauptmann Willi Herold (Max Hubacher) is about to shoot his PP at a deserter "to earn roast" from the host.

After Kipinski lost his mind, Willi fires the pistol next to his ear to keep him quiet.

Herold offers his pistol to Roger to finish the dirty work.

Roger picks up the pistol dripped by his friend. 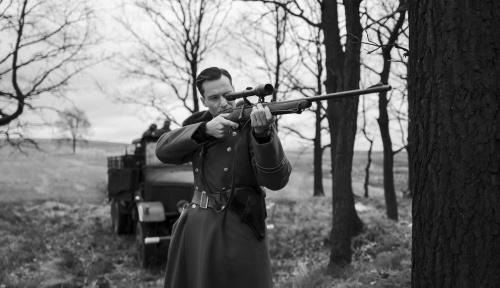 This promotional image shows a detailed view of the rifle, as it is only seen in short, fast scenes.

Junker aims the Sporter at the fleeing Herold who ran into the woods.

A hidden Willi looks at Junker standing right above him.

Later at the entrance of the prison camp, Junker approaches Herold which offers a good view of the rifle's shape.

German Feldgendarmerie and regular soldiers including Gefreiter Freytag are armed with Karabiner 98k rifles. Willi Herold is also seen with Freytag's Kar98k and some members of the Volkssturm carry this carbine as well.

Willi looks at Freytag's Karabiner leaned against the abandoned car.

A German MP aims his carbine, equipped with a hooded front sight, at Herold.

The Volkssturm unit on bicycles returning to report to Capt. Herold.

Some German soldiers can be seen with vz. 24 Czech Mauser rifles.

A German MP at a checkpoint with his rifle over his back.

Having doubt with Herold's orders, Kipinski points his MP40 at him.

Kipinski orders the prisoners out of the barrack while holding the submachine gun.

Two MP41s are wielded by German paratroopers who united with Herold's group.

One of the Fallschirmjäger with the MP41 (left) and Kipinski (center) aim at two Landsers pulling a FlaK.

Front view of the two paratroopers aiming their MP41s.

As a Feldgendarmerie unit approaches, the shouldered MP41s are seen.

A camp guard runs with his MP41; the fire selector is visible on the stock.

An MG42 is briefly seen held by Roger in Herold's Mercedes-Benz G3.

The FlaK being fired at an incoming British plane.

A close-up of the gun as it is put in position.

The gunner takes aim at PoWs crammed together in a trench.

The shotgun held by the left Villager in the background.

Closer view of the rear part.

A Panzerfaust 30 is seen mounted on a bicycle.

The last cyclist to the left has the mounted Panzerfaust.

At least two of Herold's men are seen with Model 24 Stielhandgranates on their belts.

The two soldiers on the left next to Herold have the grenades.
Retrieved from "http://www.imfdb.org/index.php?title=Captain,_The&oldid=1481475"
Categories: