That Man in Istanbul (Estanbul 65)

The following weapons were used in the film That Man in Istanbul (Estanbul 65):

Tony tucked the gun into the belt of his trousers.

Tony charges revolver during a nighttime firefight with gangsters. Note the shape of the front sight that matches HW-1.

Various characters in this movie are seen use a Colt M1911A1 pistol.

Even some of the Taiwanese agents have this weapon. 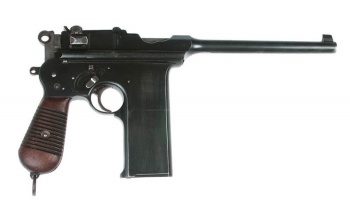 The Taiwanese spy aims his gun at Tony.

Another Taiwanese in a shootout with bandits.

One of thugs (Luis Induni) is equipped with the Luger P08 pistol. 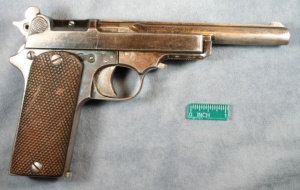 When a thug was killed by fire from SMG, his pistol fell on the floor.

Some thugs, including Bill (Mario Adorf) use fantasy SMG with a scope. Tony (Horst Buchholz) and Agent FBI Kenny (Sylva Koscina) also are seen with this weapon.

One of the thugs holds this weapon in hand.

Bill (Mario Adorf) aims at a man with a steel hand.

Some gangsters in movie are armed with Star Z45 submachine guns.

At the airport is seen standing the men with these weapons.

During the night car chase some thugs also use Star Z45.