Pistols, identified as Glocks, are not Glocks, as a trigger spur is seen on the first screenshot, and the shape of the front of the slide on third screenshot also looks different. I have a slight guess that it can be a Fort-12, or more likely, a non-lethal Fort-12T. 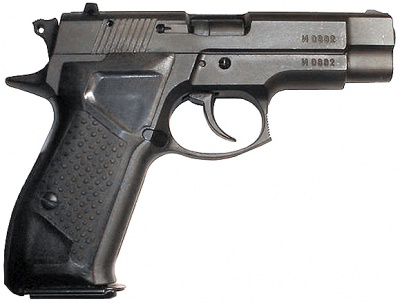 I'm also unsure about Umarex RWS C225 Target as the barrel compensator is turned upside down (but it can be a mere mistake of moviemakers). Greg-Z (talk) 13:10, 23 September 2015 (EDT)

Here's what I changed and why:

I guess that Walther and Glock are also blank firing or airsoft guns. Cannot prove it but most modern Russian movies widely use airsoft with CGI muzzle flame. The flamethrower resembles Soviet wartime ROKS-2 but still differs so I think that it's a kind of not very accurate replica. Greg-Z (talk) 01:06, 8 May 2017 (EDT)