I thought it was still pretty good personally, if a little inaccurate in the way events played out. We definitely could have done without all that BS between Stunner and Cherry, yeah, but seeing things from the CIA's point of view was necessary, IMO. As much as movies and TV like to make the CIA out as untrustworthy spooks (I'm looking at you, The Unit), they were integral to the success of this raid and countless others we'll probably never know about. Spartan198 (talk) 20:39, 9 December 2012 (EST)

I filled out the page with most of the remaining guns in the movie, though there's probably a few more that are missing. I know a Pakistani ISI operative had a pistol in a shoulder holster that I couldn't ID, for example. I plan on picking this up on DVD next month (if it's available) and will do all the screencapping then, though I wouldn't object if someone went ahead and did so. Spartan198 (talk) 22:10, 9 December 2012 (EST)

M16A2 rifles can be seen on paper targets in the killhouse during the SEALs' training for the raid. 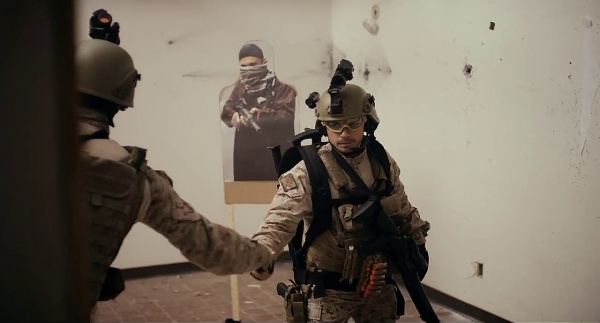 The masked gunman on the paper target in the background with an M16A2.

An RPG-7 rocket launcher can be seen on a paper target in the killhouse during the SEALs' training for the raid.

How does that exclude it from being included on the main page? The NCIS game page includes several "readily identifiable" weapons (M4, AK, Dragunov, M2HB etc.) found in-game on print material on the main page. Spartan198 (talk) 00:41, 4 January 2013 (EST)