This short carbine makes me think about 9mm Colt R0635. Everything except for the caliber looks very like the screen gun. Can it be that 9mm Colt carbine is visually modified by covering 9mm magazine with a large fake 5.56mm one, and so used for firing cheap blank 9mm ammo while looking more impressive? Greg-Z (talk) 16:07, 20 February 2016 (EST) 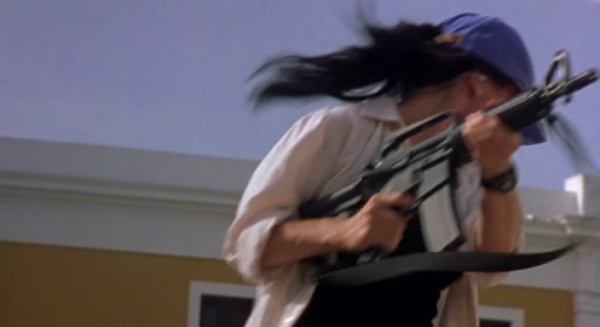 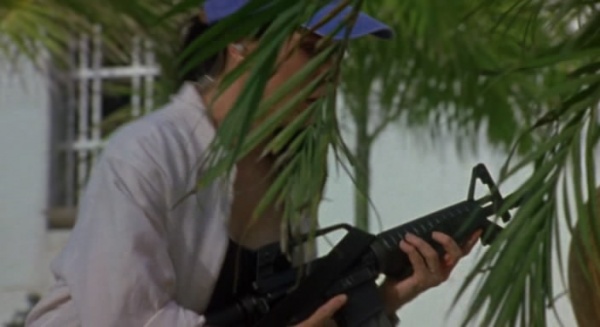 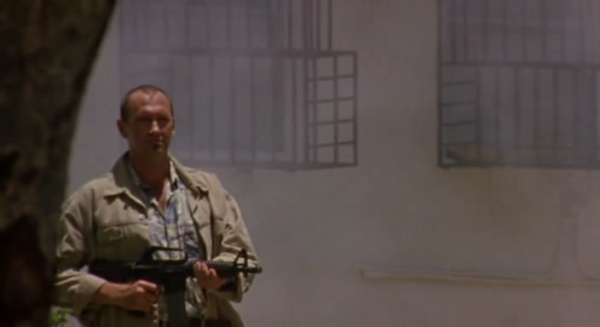 I understand that the RO635's particular blast deflector is easily installed/removed, but in the event this is not a Colt SMG since it has an A1 upper with the forward assist, which the blowback-operated SMG guns don't need and subsequently don't have (instead having slickside uppers). In Undercover Brother its listed as an XM177E1, of which it possibility could indeed be that with A1 flash hider fitted instead of the moderator. Otherwise another, more likely and simpler explanation is that these are just A1-receiver Carbines/Commandos with the barrels cut down, akin to the shorty Canadian-receiver ARs in the first few seasons of X-Files. StanTheMan (talk) 03:00, 21 February 2016 (EST)

Not sure really - Probably one of the other variants (65x) or so. In the event I think you might be best doing it like I did on the X-Files pages - Using the image of the 733 Commando as a close visual reference and noting the shorter barrel and A1 receiver (the image we have for the M733 has an A1E1 upper, but it could be had with A1 upper as well). Just a thought. StanTheMan (talk) 13:26, 21 February 2016 (EST)

The SIG doesn't seem to be a SIG to me, it clearly has a slanted grip/magwell, not flat. Doesn't appear to have an external hammer either, tough to tell. I won't swear to this but a possible guess for me might be a Smith & Wesson Sigma. The first AK I recall seeing before, can't place it right now though. Second AK is a Norinco Type 56-1 since it appears to have the hooded front sight and non-ribbed receiver. StanTheMan (talk) 03:01, 21 February 2016 (EST)

Produced perhaps not, but I'm quite certain there's aftermarket black/plastic furniture that can be installed. There are receiver markings in the one shot - Though not quite discernible, I believe they match with those for imported Type 56s (which I also believe often had the slant compensator installed). In the event, only the Chinese AKs have hooded sights. StanTheMan (talk) 13:26, 21 February 2016 (EST)

Ah, there we are - I agree that it is an Arsenal, the furniture and receiver match. I agree with it just being an odd/custom flash hider. The mag is not standard but could probably just be an aftermarket version. StanTheMan (talk) 13:26, 21 February 2016 (EST)

Are there any photos showing that this has the fire selector, because I am a bit skeptical that it is really an AC556K. Firstly, it is in a Butler Creek (I think, if not, similar) stock rather than the standard Ruger one that the AC556K uses. This isn't definitive as this could be changed, however it also appears that this didn't originally have the 13" barrel as the front sight is in the wrong place (on the exposed barrel rather than on the front of the handguard). If both of these things have been changed my guess would be that it is a custom, based either on a Mini 14 if it doesn't have the selector, or a full-size AC556 if it does. --commando552 (talk) 07:48, 26 February 2016 (EST)

This rifle isn't seen close, only in distance. The only think that I can add is that it fires only semi-auto, not full-auto, during the shootout. Anyway I agree with your arguments. From the very beginning I wasn't sure that it's a genuine AC55K. Many thanks for help! Greg-Z (talk) 12:03, 26 February 2016 (EST)

For the record, Mini-14s are considered 'assault rifles' since they fire the intermediate 5.56x45 cartridge. Again, I think it's just simpler to stick to a single 'Rifles / Carbines' section, but otherwise it can be lumped together. StanTheMan (talk) 15:13, 26 February 2016 (EST)

A Mini 14 isn't an assault rifle, one of the things a rifle has to have in order to be an assault rifle is a select fire capability, which the civillian Mini 14 lacks (AC556 is an assault rifle though by this definition). Firing a 5.56x45mm cartridge is not enough to make something an "assault rifle", a HK630 (5.56x45mm chambering of the Heckler & Koch HK770) is functionally identical to a Mini 14 being a semi-auto 5.56x45mm gun with detachable magazines, but nobody would ever call that an assault rifle. TBH, most of the firearms that we might put in an "assault rifle" category probably technically aren't, being civilian semi auto variants instead. For these reasons, I personally find it best to just have a "Rifles" category (I would also probably not bother with the "/Carbines" either but that is a whole other topic), that is unless there are a lot of rifles where it may be beneficial to split them up into different sub-categories.--commando552 (talk) 17:20, 26 February 2016 (EST)

Bah, can't believe I missed this.. Anyway, debate over the definition aside, I agree with you in your latter part - I myself usually make simple "Rifles" categories for your stated reasons - No need to make separate 'Assault', 'Sniper', etc categories unless we're talking about a large number of weapons to list. As for using "Rifles / Carbines" - I only do that when full-length/long-barreled rifles are lumped in with actual 'carbines' and/or short-barreled guns. That doesn't have to be followed really, it's just what I tend to do. StanTheMan (talk) 03:02, 7 March 2016 (EST)