It seems to me that Willis Beecham has Model 73, not Model 92. The second and third screenshots in Winchester section show detales of the rifle that differs from Model 92 and looks more like Model 73. Note the position of the front sight and the shape of connection between barrel and tube. I made a collage on which these detales can be seen. 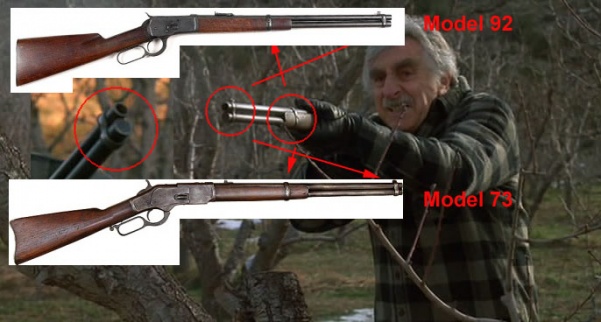 If you look at the last couple of caps you will see that there is a step half way along the bottom of the receiver, which is present on the 92 but not on the 73. Granted the position of the barrel bands and sights are different, but I imagine these can vary from gun to gun (they could even be interchangeable between different models but not sure), particularly considering the fact that these could be modern reproductions. --commando552 08:10, 6 June 2012 (CDT)

I'd put my money on a Beretta Cheetah or Tomcat. Fixer

Looking back, the snub-nosed revolver may be a third-gen Colt Detective Special. I can't get a good luck at the cylinder release though. --Funkychinaman (talk) 12:10, 29 March 2013 (EDT)

The holstered Mormon revolver looks like it has a grip like the Ruger Security Six. I can't make out the holstered snub nose though. Black Irish Paddy (talk) 20:11, 14 March 2019 (EDT)