I doubt that its a Taurus. I don't even think they were around back then? The picture in the Demo isn't very detailed but it looks like a Colt/S&W and maybe even a Ruger blend... Since its a 5 shot I would have to say it would be a Smith J-frame. Perhaps a S&W Chiefs Special (I'm not sure the year this game takes place) ---Furious Oyster

Well it's not exactly the most accurate game out there. Look at how everyone uses a weaver stance when shooting. That wasn't common till the late 70s/early 80s.

Well, maybe that's the stance they all felt comfortable shooting with. Just because it wasn't common hardly means it DIDN'T EXIST! Remember, Vito has a military background, he could have started shooting that way and the rest of the guys picked up on it. Use your head! 173.62.58.210 19:19, 15 August 2010 (UTC)

According to the Mafia wiki site, they said it is a S&W Model 12.

Judging by the cylinder release it is definitely NOT Colt.

Where do you see the cylinder release on the revolver? 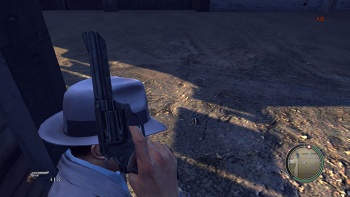 in-game it's called a Magnum and takes .357 rounds, so it probably is a model 27 from the previous game jackbel

you can buy it at Harry's gun shop in Riverside jackbel

The main page is possibly incorrect in saying it is wrong to show the C96 with a removable box magazine - In 1931-32 Mauser engineers developed two latest versions of the C-96 - models 711 and 712. The main difference of these models was the adoption of the removable box magazines for 10 or 20 rounds (source http://world.guns.ru/handguns/hg/de/mauser-c-96-e.html) AnthonyB 26/9/11

"From the gameplay I saw, it shows Joe giving himself and Vito a Colt M1911A1 but with a 32 round magazine."

I have never heard of a 32 round magazine for the M1911 series... and those mags in the pics don't look nearly that large, the look like a 8-10 round mag. What gives with that description on the page? For that matter, why is the Thompson's mag listed as a "30-round drum"? Correct me if I'm wrong but I believe 30-round magazines for the Thompson is a stick.

In the DEMO the 1911 has a standard 7 round magazine.. I'm assuming there are 2 in-game versions of the 1911. The first with a 7 round mag and the second with an extended mag. There seems to be 2 versions of the Thompson so i don't see how there cant be 2 different 1911's.

Okey just played a bit of the game. So major SPOILER ALERT!! During the hotel job, Joe hands Vito the custom made 1911. According to Joe there's only two in the world and they have them. It has a 23 round magazine. It's a shame i can't screenprint on this computer, just goes all black. It's a ordinary stainless silver 1911 with a little longer magazine. A little update, if you visit Guiseppies he has 3 of these custom 1911 on his shelf for a mere 270$. Weird since there should only be two in the world according to Joe. :)

Well then someone who made the game didn't do much research, as the magazines shown in the screencaps are nowhere near big enough to hold 23 rounds. Even if it was a custom 1911 chambered in .38 they'd have to be double-stacked, even then I doubt the mag is big enough. I don't recall there being any 1911 variants designed to accommodate a double stack mag that far back. Even Dillinger's custom .38 machine pistol had a much longer mag than that.

Dillengers Machine Pistol looked like it had two 9 round rounds made into one. $270 back then was really expensive, well over a few thousand in todays dollars. There is this pesky thing called inflation you know.--FIVETWOSEVEN 20:18, 16 November 2010 (UTC)

thanks for the great page

I don't think he has a shoulder rig because if he is wearing a shirt and trousers he still draws it the same way so that could be a glitch or he tucks it into the side of his trousers.

SPOILER ALERT! One thing that's been bugging me is that the game begins in 1945 and the Remington 870 shotgun appears during that time period, Isn't that an anachronism? Though the model could be mistaken for a Winchester 1912. Another thing that bugs me is that during that 1945 segment, they use an MG42 that they get from the guy with the eye patch. I wanna know how they managed to acquire a German weapon during the war.

The first bit is an anachronism. However, the MG-42 is easier to explain, as they probably just brought it back with them. Vito was a war veteran, so there can assumed to be other veterans like him in the mob who may have smuggled the gun back using their criminal connections. Lugers were often brought back by US soldiers as trophies of war, so the MG-42 isn't as big of a stretch. -- K 98.118.59.151 21:23, 26 August 2010 (UTC)

Couldn't the same thing be said about the Garands? And I'd imagine getting ammo for MG42 and the Kar98 (Didn't they share ammo?) would be a bit more difficult BeardedHoplite 17:16, 29 August 2010 (UTC)

Not really, 8mm Mauser ammo was a common hunting cartridge back then. Hughjefender.

Could be, but Shansi has the integral magazine slightly longer, protruding from the bottom. --AlPachinko 22:45, 28 August 2010 (UTC)

Is it really that special ?

Regarding the custom 1911 that Joe gives you at the beggining of Rooms Service. Is the increased magazine capacity such a big improvement ? I do realise 23 rounds are a lot compared to the standard 7+1 configuration but he treats the whole thing like the handguns have been converted to fire full auto or smth. Don't get me wrong I'm not trying to trash anyone's work, but I had the impression that features such as maga capacity increase could be implemented rather fast, provided you had the right tech and knowledge.

Dissapointed there was no double-barreled shotgun.

I'm sort of bewildered the developers didn't include some sort of Lupara or general side by side shotgun. That's usually a trademark in Sicilian mobster stories. It would've made a good option to the pump action shotgun. A missed opportunity if you ask me. - EastClintwood89

I don't think the fact that there's a Remington 870 is an anachronism. This game's probably not set in the forties. I listen to the news in the game, and they're talking about things like UNIVAC 1, the Hydrogen bomb, Microwaves, NBC broadcasting in color, etc. The first test of the hydrogen bomb was 1951, UNIVAC 1 was made in 1951 or '52, and NBC began to broadcast in color around 1954 or so. So I'm guessing this game is probably set in the 50's.

The first five or six levels in the game take place from 1943-1945. So yes, there is some anarchronisms with the first few levelsGunner5

Why was the Mauser C96 changed to a Type 17? Yes, it may use .45 ammo ingame and have a detachable magazine (which the Shansi didn't have anyways) but it is clearly modeled after a standard C96. Any input? I will change it back if we all agree or nobody does before I get to it. --ColonelTomb 20:50, 1 December 2011 (CST)

I know that this is an old discussion, but why didn't they just make it fire 9mm ammo? All it'd take is a simple texture change to put a red 9 on the grip, turning it into, well, a Red 9. As for the detachable magazine, well, that's just the devs not wanting to make a complicated reload animation that's different when the gun is or isn't empty. Pyr0m4n14c (talk) 11:04, 15 April 2017 (EDT)

A stupid question: Was the M2 Aircraft available with spade grips and M2HB style sights? 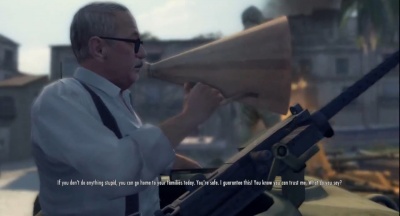