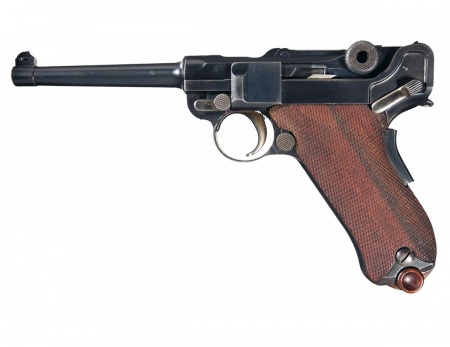 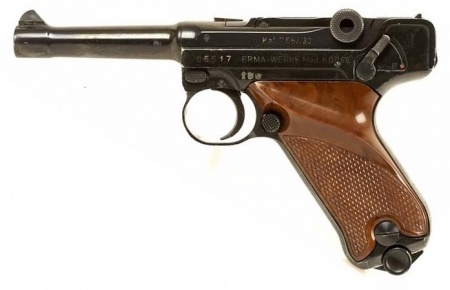 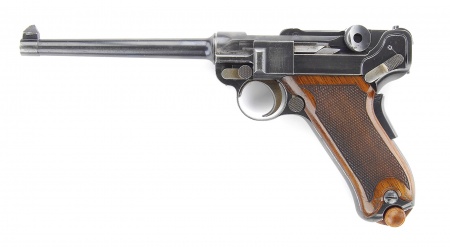 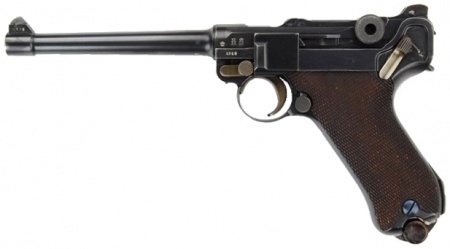 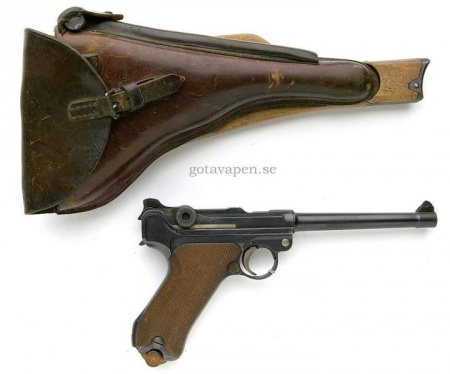 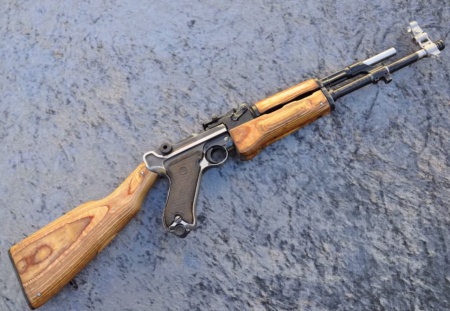 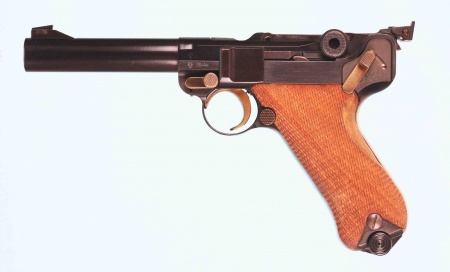 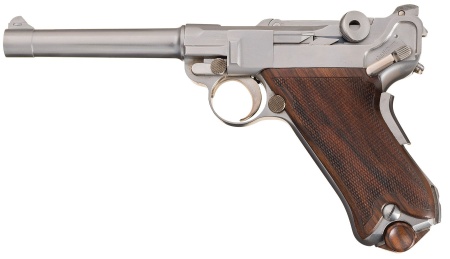 Luger converted by John Martz to .45 ACP with 4.75" heavy barrel 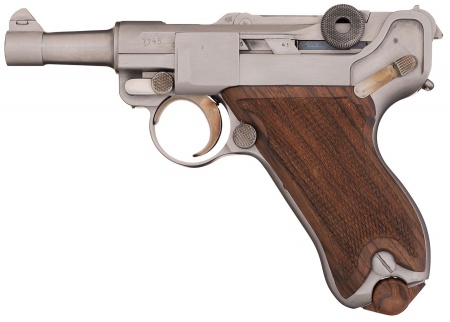 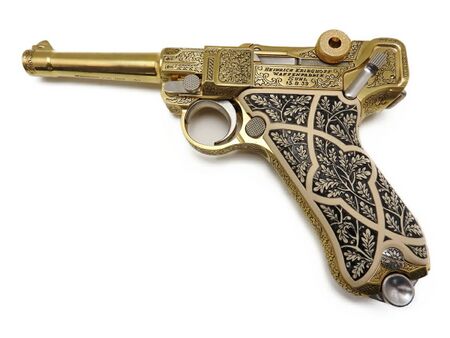 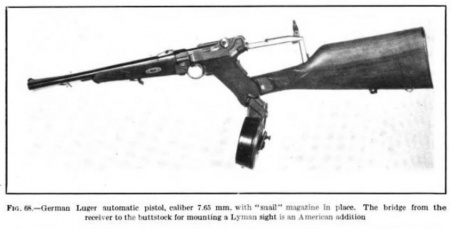 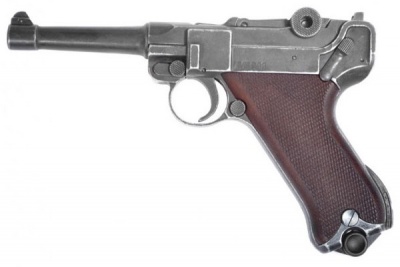 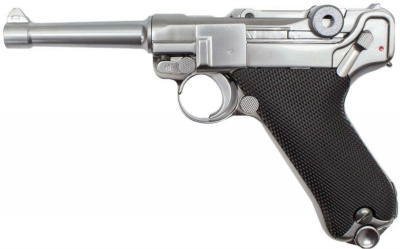 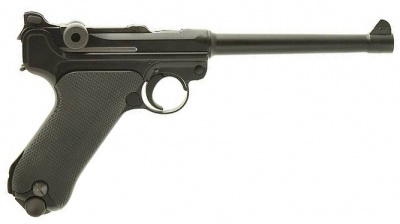 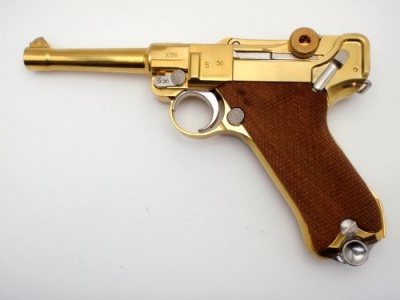 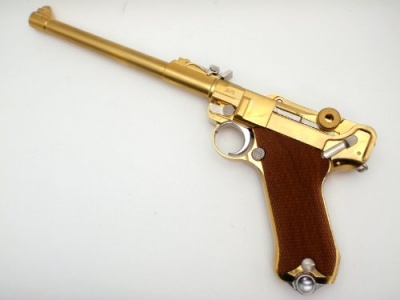 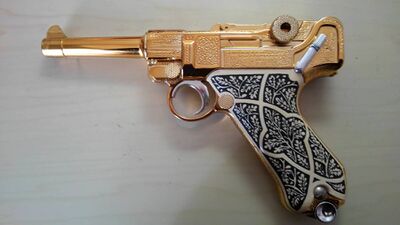 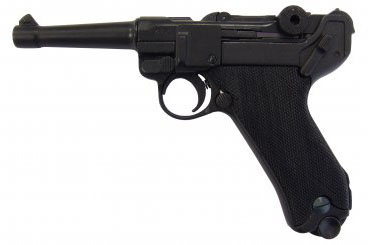 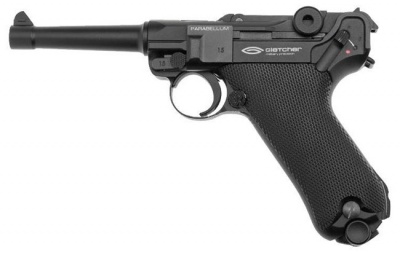 I can think of another movie with the Luger, that is The Land That Time Forgot. Also the Bergman MP-18 is in that movie (anachronistic because the movie is set in 1916 while the U.S. is still "neutral") as well as Mauser 98 rifles and a Webley revolver.

Has a Luger Carbine ever been used in a movie? David.

I have found a picture of the famous Luger Pistol chambered in .45 ACP from 1908. It is the only known .45 Luger to still exist today. The other pistol, Serial No. 1, was used in the 1908 pistol test in which it was tested along-side the Colt M1905 Pistol. The original was thrown away after the tests and the other remaning Lugers were either lost or destroyed. This .45 Luger Pistol remains the last of its kind to this day. - Kilgore

Actually, I remember hearing about a gunsmith who was handcrafting a limited number (around one hundred) of .45 Lugers according to original specifications. However, the high price tags ($10,000-$100,000) meant that the Lugers were more pieces of jewelry than weapons. -Anonymous

That may be very expensive just for a reproduction, but compare that to the original .45 Luger, which was recently valued at more than $1 Million. - Kilgore 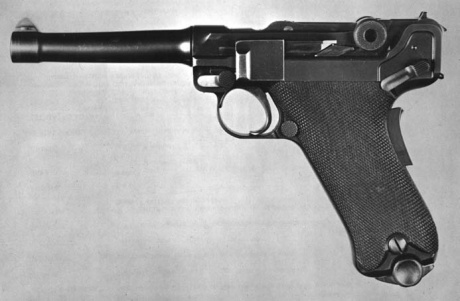 They also made a .45 ACP carbine, link: http://www.weaponscache.com/forum/pistols/2171-worlds-most-expensive-handgun-45-acp-luger-carbine.html

Actually, the famous "million dollar Luger" sold for that in 1989, in a private sale to an Indonesian businessman (who, incidentally, was not a gun collector and probably overpaid). It went up in auction back in March of this year and sold for $494,500. Combination of the economic climate in the 80s (remember "Greed is good"?) compared to today's recession, and the fact that the provenance of that particular gun is actually somewhat shaky. It's definately a real 1907 .45 Luger but there's real doubt as to whether it's actually one of the US army test guns. DWM made a few .45 prototypes for the commercial market as well before deciding there wasn't a market for it. The idea that there's only one survivor isn't accurate, serial # 2,4,7 are known, as well as the carbine, the authenticity of which is questionned. - Nyles

What I can't exactly understand is why there wasn't a market. I mean, Lugers were popular, .45 ACP was popular, why wouldn't a combination of the 2 be popular as well? Did the target markets just not overlap? I mean, you offer a gun owner or collector a freshly-produced .45 Luger today and they'll probably cream their jeans. So, what gives? Pyr0m4n14c (talk) 09:03, 22 January 2017 (EST)

I seem to remember a scene from an old science-fiction/monster movie, maybe from the fifties or sixties, name unknown, in which a gold-plated Luger with the snail-drum mounted (also gold-plated) figured prominently towards the end. I had thought it was "The Day The World Ended" - I'm pretty sure it was that sort of "post-apocalyptic" plot-line, with mutated humans, etc. - but that was in b&w, while the flick I'm thinking of had to be in color, or the "golden" Luger would never have been noticeable.

Unfortunately, I saw it so long ago (early seventies) that I can't recall anything else about it and have never seen it since.

Does anyone recognize that extremely-vague description?

Well if you all checked IMDB, then you would know that the movie was indeed COLOR, not black & white. :) So it is possible, though I myself have never seen that movie. Even on MST3K ;D MoviePropMaster2008

If you had read what I wrote, then you would see that I did not say that the movie was in black & white. I said that at the time we only owned a black & white tv set. I know that the movie was in color because it was one of a series of Roger Corman movies that American International hired Larry Buchanan to remake for syndication to tv stations. They were having trouble syndicating the originals because they were in Black & White. David.

I just watched it on Comet TV. The Luger has a shinny finish, but as the scene was filmed day-for-night, I couldn't tell if it was gold plated, or chrome plated. The drum magazine seemed to have the same finish on it.--Krel (talk) 00:49, 23 April 2016 (EDT)

I'm trying to ID the specific variant of the pistol used in High School of the Dead, as it's not the Artillery model which picture on that page is, and I thought I had it pinned as the P04, given the detachable stock, 6 inch barrel, the grove-like features on the round parts of the base of the magazine (which I read are specific to the P04), and most notably the rear sight, but then I saw both the Marine P08 and the P04 on this page, which look almost identical, and now I'm lost. Can someone with better knowledge of this gun's variants help me out? Here's the completely identical manga version of the scene screencapped on that page, simply more detailed, and here's official artwork of Saya with her pistol. EDIT: Looking into the "Vickers Ltd" on it, I found this on Wikipedia: "The company was also involved in the manufacture of 6000-10000 (6181 is often quoted) Luger pistols in 1922-24. These 1906 pattern pistols were in 9 mm calibre and part of a contract for the Dutch military. The Lugers are identifiable by the inscription "Vickers Ltd" on the forward toggle link." This makes sense, as it was referred to as a "Holland model" in the show, though I still want help with the details here. Alex T Snow (talk) 17:56, 27 March 2014 (EDT)

Being from Holland and knowing something about the Luger in Dutch service, I am glad to oblige. From 1911 to 1942 it was used as the official pistol of the Royal Netherlands East Indies Army, the area that is now Indonesia, which was a colony at the time. Being introduced in 1911, it was referred to as the M.11 and it was produced in several locations. In the period 1911~1914 at DWM in Germany, 1919~1928 assembled at Vickers in UK from German parts and from 1929 onwards again at DWM in Germany. For more detailed info, please check the M.11 page on the website of the Dutch Army Museum, it has excellent info in English (below the Dutch) and images. Enjoy! PeeWee055 (talk) 06:29, 28 March 2014 (EDT)

Hey,fellas!I've been thinkin'recently about something.The Luger LP08 looks to me like an ancient Glock.Why?Simply because it seemed so modern for that time.I mean,a mag which holds 30 9x19 mm rounds,a nice grip, a heavy barrel which compensates the recoil....They all seem like a Glock concept to me.Please tell me what you think about this idea.--VLAD M (talk) 07:03, 19 March 2016 (EDT) 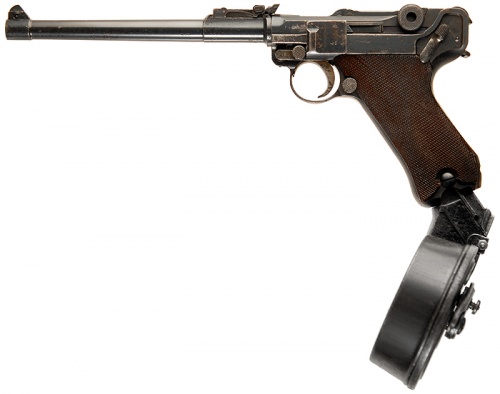