Appearently, this is the first film to feature the H&K P30L. Also, I am wondering what kind of grip was Keanu using ? Because it looked like a "thumbs up" grip to me.

I could've sworn that Keanu uses a Desert Tactical Arms Stealth Recon Scout that he gets from one of them but I could be wrong.--John Ryder (talk) 18:42, 15 November 2014 (EST)

Just watched the movie. Nice action. However, based on proximity of shots and on this spot, all (or most part) of the weapons from this movie are airsoft. https://www.youtube.com/watch?v=g-KA1CNz93M

Although airsoft are sometimes used for non-firing scenes in movies, I doubt that "all" or even "most" of the guns in this movie are airsoft. Nobody makes an airsoft version of the P30L, for example (Umarex makes air replicas of the standard P30 with licensed trademarks, but they do not produce the long-barreled P30L, the particular variant that Keanu uses in this movie). Many of the other guns in the movie, such as the Kel-Tec KSG and Coharie Arms CA-415, also do not have airsoft equivalents at this time.

Even though GBB pistols have been used for actors firing at other actors at close range, there are also ways to make real guns perform the same function. For example, Cinema Weaponry installed an electronic recoil system into a real Glock 19 for the scene in Terminator 3 where Arnie is shot by Claire Danes from less than a foot away. Something similar was used in the "dodge this" scene of The Matrix when Carrie Anne-Moss shoots the Agent in the head with her Beretta 84F. Given the budget for John Wick, I imagine that the armorers could have developed similar mechanisms. -MT2008 (talk) 11:20, 30 November 2014 (EST)

Thank you for the explanation, I put it wrong, blaming that all weapons were airsoft. It's clearly seen in the video, that guns actually do the reload cycle. It's definitely easier to use recoil mechanisms for the armorers.

More of a curiosity than anything else, but I found this poster on a Redbox near my house. After browsing around, it looks to be this particular airsoft pistol. Figured it was mildly noteworthy. --Pokedalt (talk) 19:23, 6 March 2015 (EST) 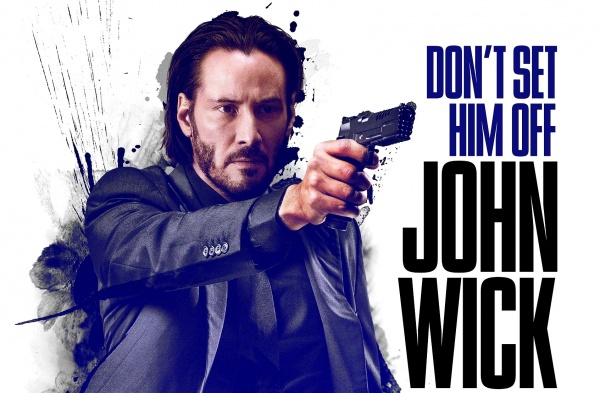 The Savage rifle used by the safe house guard is a 110 BA not a 10 BA. The 10 BA has an oversize ball bolt handle and the 110 BA has the cylindrical tactical handle. The 110 BA is the long action version of the 10 BA and is available in .300 WIN MAG or .338 Lapua Magnum. The 10 BA magazine also protrudes farther below the trigger guard than the 110 BA magazine.

The roof patrolling sniper at the safehouse is carrying a rifle I can't identify clearly. At first the silhouette convinced me it was a SCAR-H Long Barrel (hell, I even wrote up an entry), but then I realized that the "top rail" was actually a scope and the "irons" were just flipped up scope caps. Now I think it's some sort of AR-10, but I can't tell. The images to work with are pretty few all are from a distance, so I don't know if this one is even possible.

Scope caps looks like irons, silhouette can fool you into thinking its a SCAR.

Pardon the mis-labeled pics. I was really convinced for a minute there.