He did have some unusual shooting methods, but if you want to see Jim comment about the scene with his first victim on the hit list, here's the link: http://www.thegunzone.com/software/zubiena2.html I thought you guys might be interested in this. :) -Gunman69 06:12, 7 August 2009 (UTC)

The first thing I noticed about his gun skills is when he draws the 1911 to shoot the guy in the yellow shirt. I hit the snap button when I saw him draw and the snapshot I got was him firing the 1911. Which is the first shot on Miami Vice's 1911 list. He was super fucking quick. I wonder if he was asked to fire from the hip with the Franchi and the Ruger. Both had folding stocks, could have been fired from the shoulder. It looks like he was big on safety too, always wore glasses whenever he handled the weapons. Very cool info about him. Predator20 13:58, 7 August 2009 (UTC)

Read that link a little better, it hurt to fire the Franchi with the stock extended. Predator20

Thanks for the second link. That 1911 draw and the "Mozambique" were executed perfectly. When I first saw that, I just sat there in awe at the awesome tactic I had just seen. Good thing he kept his 1911 ready to fire and that he was extremely quick! Otherwise he would have been toast. -Gunman69 15:55, 7 August 2009 (UTC)

Glad to see that you guys are interested in Mr. Zubiena. I shook his hand many years ago at a gunshow. I remember him back in his prime and he was something else. I imagine he's still pretty impressive. I saw "The Hit List" when it first aired in October of 84. I was sixteen and his gun handling skills took my breath away. I remember at the time thinking that Miami Vice was something very different. At the time television cop shows just didn't bother with technical accuracy. The overall show hasn't aged very well when watched today, but like Hill Street Blues it broke the mold and led the way at the same time. IMHO --Jcordell 16:21, 7 August 2009 (UTC)

The main reason why Miami Vice hasn't aged well is the clothes. It was a quick in and out period. There are some good articles from that site-link you posted. A gun writer talks about how he got a two Bren Ten's and they weren't worth a shit. I'm going to add some of Zubiena's comments on the Vice page too. Predator20

I had just started shaving whne Miami Vice premired and I tried to grow stubble just like Don Johnson.No shit. Hey I was sixteen. Made sense at the time. That unshaven look became so popular that you could actually buy an electric razor that would leave stubble. Amazing and stupid at the same time.--Jcordell 17:08, 7 August 2009 (UTC)

Miami Vice came out the year I was born 1984, so I watched the reruns in the early nineties. I remember one of the first albums (record) my older brother bought was a Miami Vice record. Don and Phillip had a weird neon outline around them. Predator20

@ Jcordell - I read about that razor somewhere on wikipedia. I didn't think it actually existed until you said it! haha. You're right though about it being amazing and stupid at the same time. But, I guess that's what was popular back then. Like a lot of people nowadays might make fun of the clothes Don Johnson wore in Miami Vice, but it was hugely popular at the time. Also, wouldn't it be cool if somehow Jim Zubiena came across IMFDB? -Gunman69 16:17, 8 August 2009 (UTC)

I went to the Miami Vice.org forum and posted a thread discussing this site. I addressed the thread to Mr. Zubiena since he is an active member of the Miami Vice forum. Right now the site seems to be down. Don't know why, but who knows maybe he'll see the thread and come on over. Oh yes the razor really exsisted. I remeber seeing ads for it in "Mens" magazines at the time. I also remeber Don Johnson running around with no socks on. Pretty radical back then. --Jcordell 01:42, 9 August 2009 (UTC)

Yeah, I liked seeing the no socks thing. Again, part of Crockett's style. I'm really happy to hear that you posted that! I really hope he takes a look at this. His contributions would be very valuable to us. I think he would also like all the things we are posting about him, too. Much appreciated, Jcordell! Excellent work. -Gunman69 02:40, 9 August 2009 (UTC)

That great you posted on the Miami Vice forum, he seems to check it. Too bad the site over there is kind of glitchy. I would like to see him expand his bio, he trained William Peterson in Manhunter too. Predator20 02:57, 9 August 2009 (UTC)

Really? That's awesome! He must've worked with Michael Mann quite a bit. I really wish the site wasn't down, that way he could check IMFDB out soon. Hopefully it will be back up soon. -Gunman69 03:25, 9 August 2009 (UTC)

That is what he said in this thread. http://www.miami-vice.org/forum/forum_posts.asp?TID=9716&KW= There is no telling how many others. It would be great if he finds his way over here. I wonder if there are any videos of him shooting in competitions and stuff like that around? - Predator20 03:48, 9 August 2009 (UTC)

In addition to acting and shooting Mr. Zubiena performs with a band. Here's a photo of him taken I believe approximately ten years ago. Notice the white man afro is now gone.--Jcordell 19:41, 7 August 2009 (UTC) 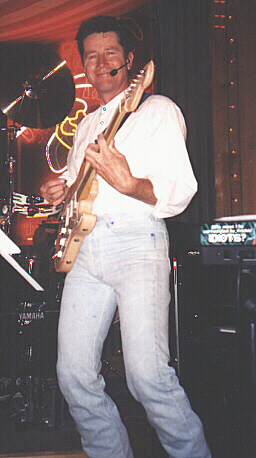 Evidently those glasses were given to him by a sponser/manufactuer of shooting apparel and they went with his ex-wife. --Jcordell 19:45, 7 August 2009 (UTC)

A Response from Jim Zubiena

This is his initial response to my posting on the Miami Vice forum.

Hello JC, As stated in the longer post I don't believe the rifle was American made. I recollect it being a Steyr or some other European manufacturer. I went to your link and found it... flattering. BUT I have never been referred to as "lighting Jim" except by a single writer who made that up a bunch of years ago. I don't even know who he is but I was not called that in any circle I frequented. I check in here once in awhile so feel free to question. Jim

So I've gone and removed the info about his nickname from the page. Also after doing some research I do see the similarity between the Steyr-Mannlicher Sporter Rifle and the one seen the Miami Vice screencap. So I'll go over there next. But hey he knows about his page now. And he likes it. So lets all break our arms patting ourselves on the back. LOL. --Jcordell 17:56, 9 August 2009 (UTC)

I remember seeing "The Hit List" for the first time and not only did I think he was super fast in his shooting but I thought it was Richard Dreyfuss at first. He looks the spit of him in "The Hit List".