I will be updating this page as I go through and screencap the series, and I will be making use of the official S.A.C. artbook to fact-check the page as I go. However, I have already encountered a few weapons that are not covered in the book and are, as far as I know, fictional designs. All of these will be left with generic names. If anyone has any information about any of these (or if they are real designs and I simply do not recognize them) your help would be appreciated.

Batou fields a man-portable GE M134 Minigun to slow down the incursion of Umibozu troops into Section 9's headquarters in episode 24. The Tachikoma sentient multiped tanks can also be fitted with compact .50 calibre multibarreled machineguns, if their standard 50mm grenade launcher is swapped out. 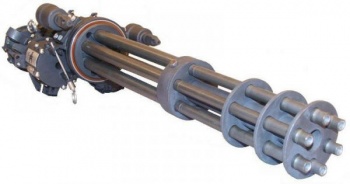 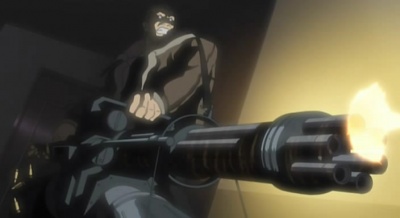 Batou opens up with his hand-held GE M134 Minigun

--This looks a little too big for a minigun... I think it might actually be a M61 Vulcan.

Batou's big, but not that big. Besides, look at the ejecting brass - surely not meant to be 20mm?

Could it be a six barreled version of the General Dynamics GAU-19/A?

(i copied this whole section from the article)

I'm pretty sure the AMR Saito uses to snipe the quadruped tank is a Lahti L39, not an NTW-20. It really looks nothing like an NTW-20 other than it is a really big sniper rifle and shares more with the L39, in particular, the top loading magazine, stock shape and "ski legs."

I am currently re-watching the series, and screencapping as I go. Hopefully this page will be up to snuff withing a week or two.--PistolJunkie 16:06, 11 October 2010 (UTC)

You can, but you don't have to. I plan on watching it after I'm done with both TV series, and if there are any non-fictitious firearms, then I'll do it as well. Of course, if it's nothing but Seburo stuff, don't make it.--PistolJunkie 01:16, 12 October 2010 (UTC)

I just rewatched and screencaped SSS. All of the weapons in it are either fictional (like the C26A) or are fictional variants of real guns (like Motoko's P90 in a futuristic shell). I'll keep the images saved, but unless an admin says to put it up, it's best not to.--PistolJunkie 19:05, 20 October 2010 (UTC)

This is interesting... the episode is about a rebellious hacker/armed robber who rips off the rich and privileged and has a major web following, and he has a stylized "JD" logo that morphs into something uncannily resembling the Laughing Man symbol from Ghost in the Shell: Stand Alone Complex, with the same half-circles for eyes above the D as a laughing mouth, and the J resembling the cap shape (although moved a bit to the left). And I doubt it's a coincidence that the character here goes by "JD" (short for Jamie D) and the Laughing Man logo includes a quote from Catcher in the Rye by J. D. Salinger. Plus Jamie D is a hacker who engages in misdirection and hides his true face, while the Laughing Man hacked cameras and cyberbrains to replace his face with his logo. There's no way all of that could be a coincidence -- I'd say we've got an intentional GitS:SAC homage in a place I never would've expected to see one. Excalibur01 (talk) 23:00, 16 November 2012 (EST)

The "unidentified pistol" appears to be based on a short-barreled M1911 variant with adjustable sights. Compensating for the fact that the weapon is hand-drawn, most of the details seem clearly based on the model 1911 (such as the distinctive slide shape and trigger). Even the rear sight appears to be an approximation of the popular L-shaped adjustable sight commonly seen on 1911 variants. The only components that do not fit the 1911 diagnosis are the slide lock and the safety catch (not to mention the lack of a spring tube for both). The slide lock appears to be a flipped version of the normal 1911 lock, while the safety catch is a much simpler design and seems similarly flipped. I have so far been unsuccessful in finding a 1911 clone that has anything even vaguely resembling the flipped slide lock / safety catch, so I would tentatively suggest that these are mistakes by the artist rather than a depiction of a yet-unknown gun.