FN P90 Tactical LV with M68 Aimpoint red dot scope, Surefire Universal weaponlight, and suppressor. The LV model is fitted with an integral laser as noted by the plate on the front of the grip, and the laser warning sticker - 5.7x28mm 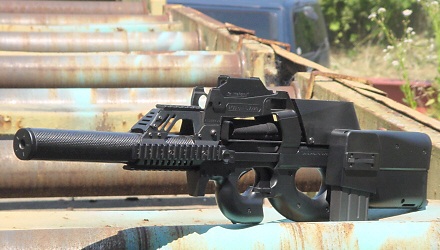 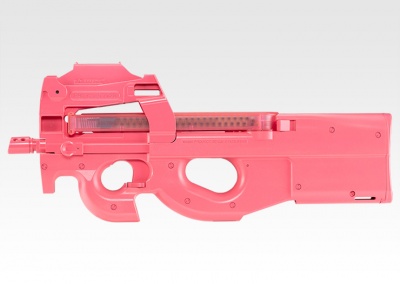 Do FN actually offer a TR version? As I understood it, the TR version is a figment of airsoft gunmaker Toyko Marui's imagination which was created to allow them to resume production after the mould for their standard P90 sight block broke. I have seen real P90s with triple rail sight blocks in photos, but described as aftermarket parts. Airsoft P90s are so close to the real thing, and P90s are so rarely seen actually firing on film, that I feel it is likely that all or nearly all P90TRs on film are actually airsoft guns.

With the PS90, I thought that was semi-auto only in factory form, sold as the civilian-legal version of the P90, hence the long barrel, much as an HK94 is to an MP5. I'm not certain about either of these things, so I thought it best to ask the pros before changing the page.

The PS90 is according to FN a Semi-Automatic only weapon. As for the P90TR that is offered by FNUSA as a Standard Production Model.Rockwolf66 16:58, 1 April 2009 (UTC)

FN only offers 30 round magazines for the civilian version of this gun but I have heard that the 50 round magazines are fairly easy to find after market. Can anyone confirm or deny this? -Anonymous

I found a few on impactguns and gunbroker, you can also buy directly from their site fnhusa, and I'm pretty sure you can find some from google.--ThePotShot 04:09, 18 October 2010 (UTC)

But then theres the aftermarket magazines plus the tooling needed to make those magazines. Its really pointless.--FIVETWOSEVEN 20:09, 16 February 2011 (UTC)

The P90 can penetrate through light bulletproof vests (mostly Level II) like those wrapped in Kevlar with ease, but it cannot actually penetrate through the more heavier bulletproof vests. The 5.7x28mm rounds are similar to the 4.6x30mm rounds fired by the MP7. In fact, both the MP7 and the P90 are technically and generally similar in terms of accuracy, compactness, stopping power, and weight (though the P90 is more bulkier than the MP7). The 5.7x28mm rounds are overall powerful, light, and a similar size to the 9mm rounds fired by most submachine guns. - Kenny99 22:09, 16 September 2011 (CDT)

It can actually penetrate a IIIA vest, or the CRISAT target (1.6mm titanium plate with 20 layers of Kevlar) at 200m. Basically, it will penetrate any soft armour and most helmets at this range, but will be stopped by the hard plates used in most military vests. The MP7 has similar penetration. Of course, this only applies to military ammunition, not the civilian stuff. --commando552 03:33, 17 September 2011 (CDT)

Firstly, what is the deal with the Tactical model? It is the railed top model listed on the FN Herstal website, but the FNH USA page only lists the TR version. Is the Tactical a Europe only version, or is it just that the US website is "behind the times"?

Secondly, does it deserve its own section? The only show I've found that has used it is Nikita (only checked the TR section though so could be more), is that enough? --commando552 17:54, 16 August 2011 (CDT)

Not that it necessarily pertains to this conversation, but the P90 in the P90 TR section with the aimpoint and sound suppressor looks like it could be a Tactical instead of a TR, as the scope is sitting higher and the flashlight seems further back than it should be on the TR. Dover500 06:22, 17 September 2011 (CDT)

It is a well engineered and built PDW-gun, and has a couple of opportunities compared to other guns, such as the (not-civillian) 50 rounds in the magazine, the overall smooth form, with nothing really sticking out, the fact that it packs a compact size while not loosing accuracy (thanks to the bullpup-layout), and the shells being ejected downwards, making it a perfect gun for left & right handed shooting or shooting in narrow spaces. The downsides are the almost unique calibre, the fact that many people dislike polymer-guns. And guns that look/function unusual always have a hard stand, just look at how the M16 was treated when it was introduced to soldiers.--Maxmali (talk) 07:01, 1 August 2014 (EDT)