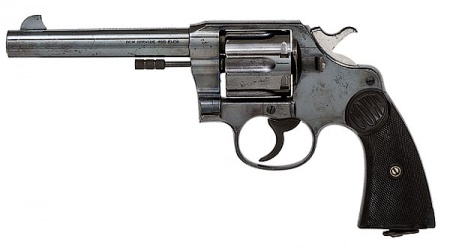 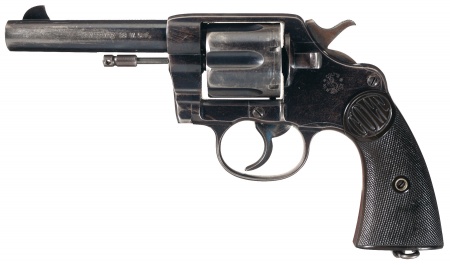 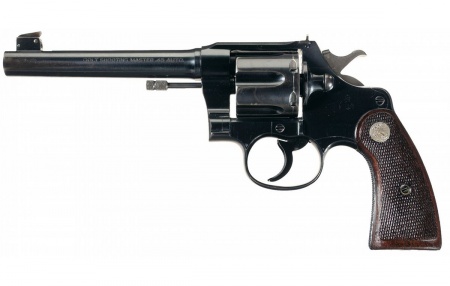 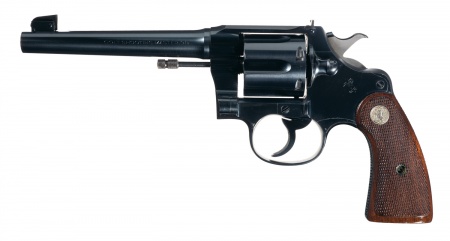 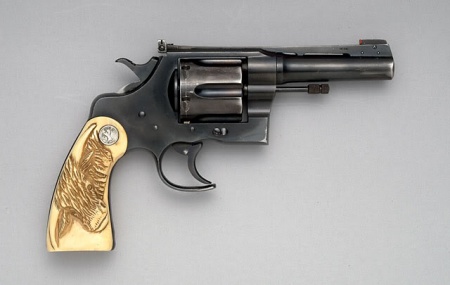 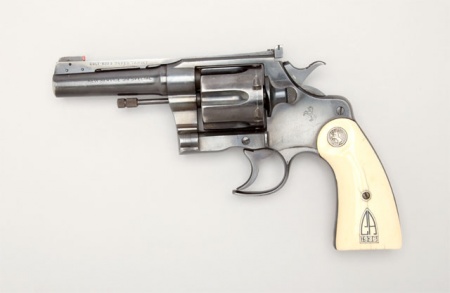 The other side of Askins New Service 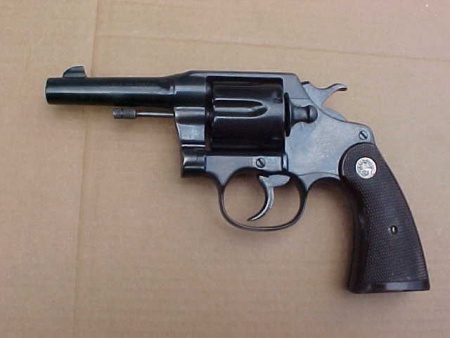 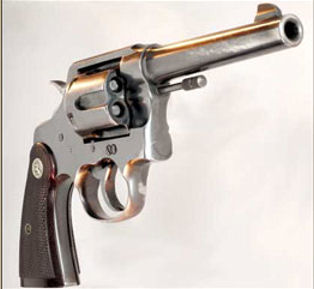 A couple of points. From what I know, the Colt M1909 was a version of Colt's large frame revolver designed to replace their .38 special revolvers, for the U.S. Military. The M1909 was chambered for .45 LONG colt. When the U.S. military adopted the M1911 auto loading pistol, their logistical chain required a supplemental pistol that fired the same round. Colt's initial offering to the US Armed forces, the M1909 was not suitable, so they rechambered the basic design into .45 acp and renamed it the Model 1917 (as well as Smith and wesson offering their own Second Model .44 Hand Ejector as their own M1917). The wording on this page is a little confusing. the other calibers were only offered in the commercial models. the U.S. military was only ever interested in a stop gap handgun that could chamber their officially adopted .45 acp. round.

Couple of points - I removed the picture of the M1898 Army because it's a completely different gun than the New Service, it has different lockwork and is significantly smaller. Also, the revolver tagged as an M1909 has commercial hard rubber grips, whereas an M1909 should have smooth wood grips like all US Army - issued revolvers, and likely an inspectors mark on the left fame under the hammer. That said, you can't be sure without seeing the bottom of the grip.

Also, the M1909 had nothing to do with the M1917. It was a stopgap measure to replace the various .38 revolvers which weren't successful in the field. The reason it was temporary is that the trials on a .45 automatic has already started, and in fact the 1909-type Colt automatic (http://www.coltautos.com/1909ci_sn7.htm) already had the basic design finalized. The M1917 was meant to supplement the M1911 when they couldn't make enough during WW1 - something not yet predicted when the M1909 was briefly used.

Also, when the .45 Colt was re-introduced with the M1909, it wasn't the original round. It was actually loaded with smokeless powder and had a wider rim for more positive ejection with the star-type ejector, vice the rod on the M1873.

Does anyone know any dates when the New Service was produced in its various calibers (as well as various other features)? I can't seem to find any information on this readily available anywhere online so also if anyone knows of any online resources about the New Service, I'd appreciate knowing about them. Thanks in advance. - Speakeasy804 02:04, 10 June 2010 (UTC)

I have tried and tried to locate the years that the different calibers were introduced for the New Service by Colt. It's very difficult to find that type of info since Colt treats that data like it's the formula to Coke or blueprints to an H-Bomb. Here is what I did learn. Hey only two years out of date. I make no promise about how accurate this data is.--Jcordell (talk) 18:01, 9 December 2012 (EST)

Both models were made by Colt on the large frame. Both were target models and both went out of production in 1940 and are now demanding prices somewhere around the moon.

The New Service Target was introduced in 1900 and discontinued in 1940. It had: A top frame that was lightly stippled, a checkered trigger, checkered grip straps, and adjustable front and rear sights. Before 1913 it had black, hard (Gutta Percha) rubber grips with molded checkering and Colt logos, after 1913, checkered walnut with silver medallions. It came in 6" or 7 1/2" barrel, and in .44 Special, .45 Colt, and .45ACP.

It had: Front and rear adjustable sights. Top strap, and frame back were all stippled. Trigger and both straps were checkered. The butt is slightly rounded, where that was only a rare option on the New Service Target but the square butt was an option on the Shooting Master. It was first made in .38 Special-only, but .45 Colt, .45ACP, .357, .44 Special later. It was only available in a 6" barrel.

Hey,guys! I had started a little study on the good old New Service.A verry fine revolver,nothing to say, but it seems pretty similar to the Police Positive.Maybe I'm wrong,but I just wannna be sure ...OK?😕--VLAD M (talk) 15:46, 20 August 2015 (EDT)

Aside from some smaller details, they're similar in general appearance, but so are most Colt revolvers from that era. That said, the New Service is a considerably larger revolver than the Police Positive. StanTheMan (talk) 00:48, 21 August 2015 (EDT)
You're right! But,I have noticed that the New Service seems to have a heavier triger,and the triger guard is curved on the top,unlike the Police Positive which has an ordinary triger guard.--VLAD M (talk) 05:01, 21 August 2015 (EDT)
Though I never shot any gun (in my country, is pretty hard and expensive to get a firearm),the Colt New Service( with originally .45 LC) is one of my favourite guns. My conclusion from my studies about this revolver is that the revolver is an american masterpiece....A classic....I'd like to have one...😃😉--VLAD M (talk) 05:14, 21 August 2015 (EDT)
Hi,fellas! I also wanna know if the .45 ACP bullets would ordinary work in a .45 LC revolver.I heard that,in WW1 some New Services were RECHAMBERED for.45 ACP.What is that supposed to mean? The .45 ACP has the same neck diameter as the .45 Long Colt.It's just shorter.But it would work,wouldn't it?The same way a .38 bullet would work in a .357 Magnum.The cylinder becomes some sort of barrel extinsion.....Am I wrong: