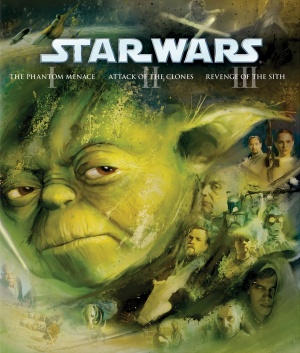 The prequel trilogy of the Star Wars saga consists of three films: 1999's Episode I: The Phantom Menace, 2002's Episode II: Attack of the Clones, and 2005's Episode III: Revenge of the Sith.

The following lists the weapons used in the prequel trilogy of the Star Wars saga:

In The Phantom Menace, the Naboo troops use the "Theed Arms Security S-5 heavy blaster pistol", which was based around a Feinwerkbau C55 Model Air Gun. 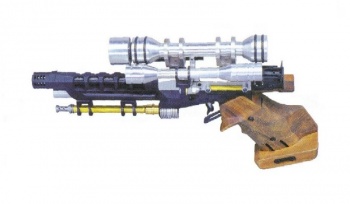 In addition to the S-5 Heavy Blaster Pistol a second unnamed pistol is also carried by some Naboo troops in The Phantom Menace. The pistol is based on a resin casting of a Walther LPM-1 Air Gun fitted with optics and an under-barrel attachment similar to that used on the S-5, and with grooves machined into the air reservoir. 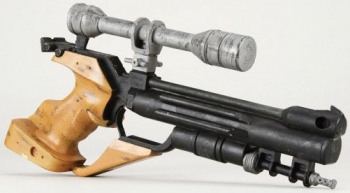 Also seen being used by Naboo troops in The Phantom Menace is the "Corellian Arms CR-2 heavy blaster pistol", which is based off of the Calico M950A. 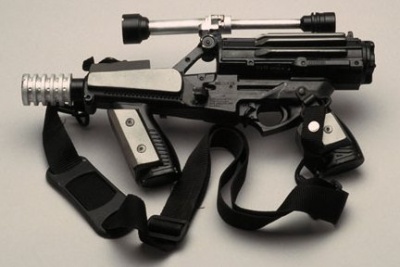 The CR-2 blaster. The Calico M950A base is readily apparent here

A Naboo trooper with a CR-2 blaster (on the right) while riding on a Naboo speeder.

A Naboo trooper behind Anakin Skywalker with a CR-2 blaster.

The "BlasTech DC-15A blaster rifle" (now known canonically as the "DC-15 blaster rifle") is the weapon of choice for the Galactic Republic's clone troopers during the Clone Wars in Attack of the Clones and Revenge of the Sith. It is essentially a larger and more powerful long-range alternative to the DC-15S blaster carbine. Although entirely computer-generated (as are all the clone troopers, no costumes were manufactured), its design is based on parts from the German MG34 making up the rear half, as well as much of a scaled-up Sterling L2A3 turned upside-down for the front.

Yoda accompanies a squad of clone troopers with DC-15A blaster rifles in Attack of the Clones.

A clone trooper fires his DC-15A blaster rifle at battle droids during the rescue of Anakin Skywalker, Obi-Wan Kenobi, Padme Amidala and the Jedi.

Swamp clone troopers fire on the Trade Federation droid army in Revenge of the Sith.

Galactic Marines aim their DC-15A blaster rifles at Ki-Adi-Mundi after Order 66 was issued.

Like the M16 has the M4, the DC-15A has the "BlasTech DC-15S blaster carbine" (now known canonically as the "DC-15A blaster"). It is basically a compacted version of the DC-15A, lacking some of the range but making up for it in handling and rate of fire. It is usually seen in the hands of officers, most notably Commander Bacara when he and the Galactic Marines kill Ki-Adi-Mundi, as well as in the hands of many regular clone troopers (in-universe, the design of the DC-15S carbine would later influence the design and development of the E-11 blaster rifle). Though all weapons were computer generated, its similarity to the E-11 (most notably the folding stock) suggests it was based on the Sterling L2A3 as well.

Commander Bacara (in the middle) with a DC-15S.

Another prop that seems to be built around a Sterling SMG is used by Padme Amidala in Attack of the Clones and General Grievous in Revenge of the Sith. Padme's version has a large extended trigger guard, while Grievous' does not and mounts a scope.

In Attack of the Clones, Zam Wesell (Leeanna Walsmann) uses a KiSteer 1284 projectile rifle. In reality, it is a Kentucky Flintlock Rifle with synthetic furniture, and the flintlock system removed and replaced with a telescopic scope.