Saw is a 2004 American horror film starring Cary Elwes as Dr. Lawrence Gordon and Leigh Whannell as Adam Faulkner-Stanheight. The film was directed by James Wan and written by Leigh Whannell. It is the first installment in the Saw franchise (despite the fact that exists a short film with the same name, directed and starred by Leigh Whannell). The plot focuses on two men who awake to find themselves chained in a large dilapidated bathroom, with one being ordered to kill the other or his family will die. At the same time, the police, led by a detective David Tapp (Danny Glover), investigate a series of gruesome murders. All this is the plan of a serial killer, nicknamed Jigsaw, who has his own philosophy explaining all his actions. He believes that one who does not value life is not worthy of it. A sequel, titled Saw II, was released in 2005.

The following weapons were used in the film Saw:

A Beretta 92FS is used by Detective Tapp (Danny Glover) after his dismissal (this is most likely his personal weapon). He loads the magazine after hearing gunfire in Gordon's apartment and runs there. He uses the gun during the gunfight with Zep Hindle (Michael Emerson) and later when he pursues Zep through the sewers. 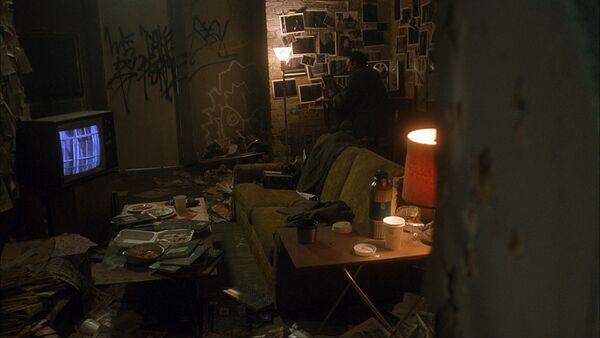 Tapp's gun lies on the table in his hideout.

The detective fires his Beretta at Zep...

... but the Beretta locks empty. 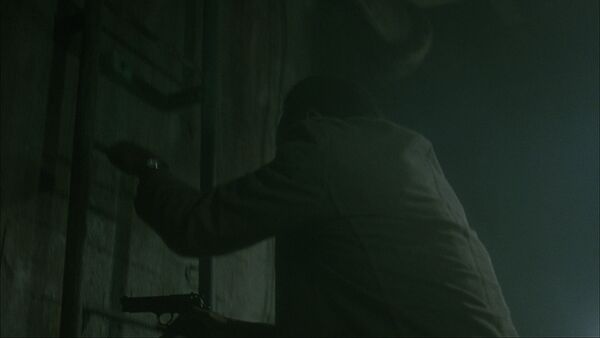 Tapp chases Zep into the building where Adam and Lawrence's game is happening. 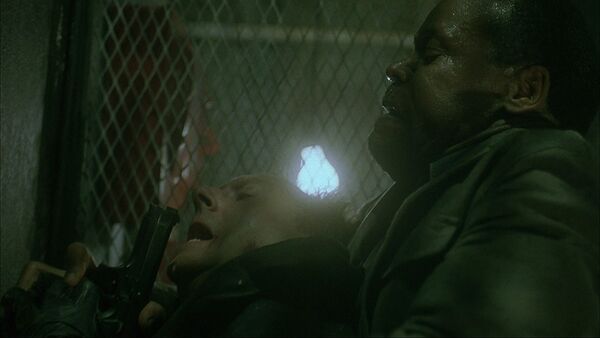 Someone give him a Darwin Award
During the fight, Zep turns the gun around and Tapp accidentally shoots himself.

Detective Sing (Ken Leung) carries a Beretta 92FS Inox as his sidearm during th flashback in which he and Detective Tapp (Danny Glover) break into Jigsaw's (Tobin Bell) warehouse, and uses it to disable one of the "Drill Chair" traps to save Jeff Ridenhour (Ned Bellamy). 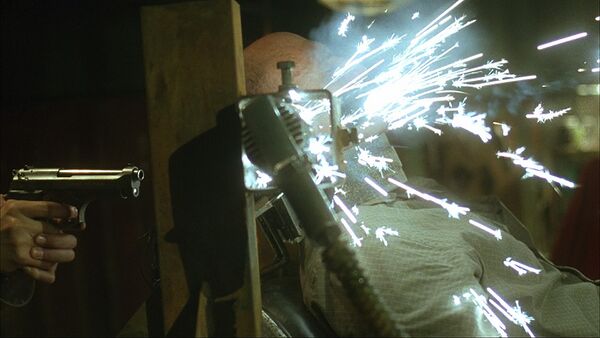 Unable to find the right key, Sing decides to shoot the lock with his gun. 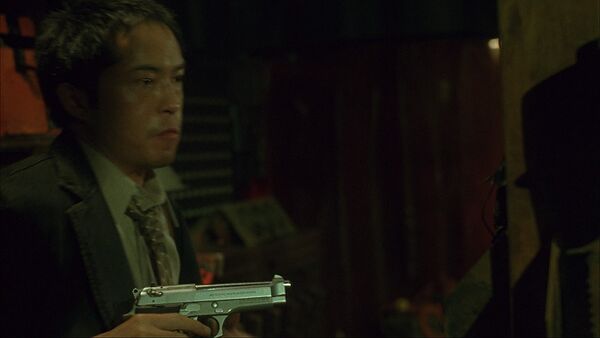 He pulls the Beretta out of his jacket... 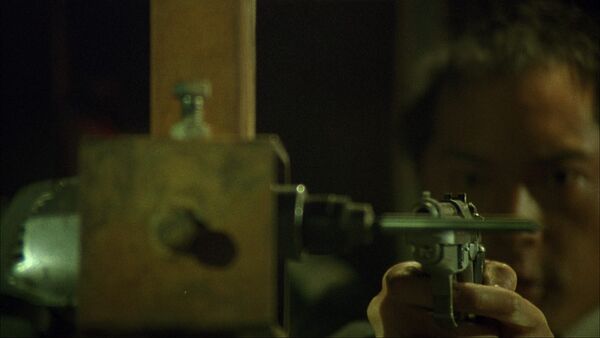 But when Jigsaw starts to run away, Sing changes priorities and starts shooting the murderer.

A Smith & Wesson Model 686 is found lying on the floor next to the dead body (Tobin Bell) in the room. An unknown person through a Panasonic RN305 recorder explains Lawrence Gordon's (Cary Elwes) task: he has to kill Adam if he wants to see his family again. A little later, Gordon finds a bullet in his pocket. When Lawrence's nerves are running out, he inserts a cartridge into the cylinder and shoots Adam in the shoulder. When the game ends, the gun remains in the bathroom. 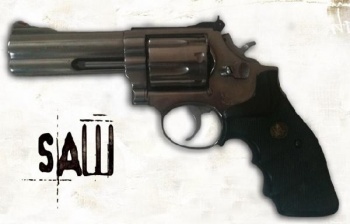 The actual Smith & Wesson 686 used in the film.

The Smith & Wesson Model 686 lies in the corpse's left hand. Note the rounded cylinder releases as on early Model 686 versions and S&W logo. 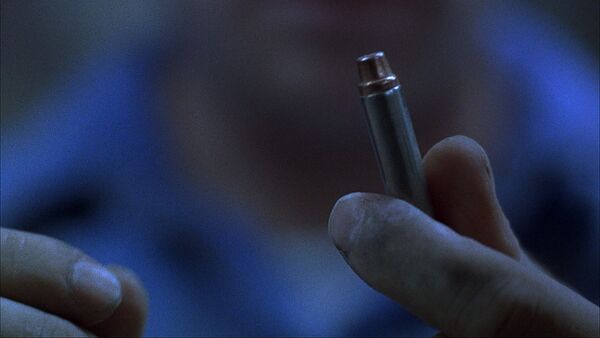 ...and loads it into the 686. The primer looks dented, so this round wouldn't fire.

Gordon aiming the revolver at Adam.

A two-tone Wilson Combat "Protector" is used by Zep Hindle (Michael Emerson) for holding Gordon's family hostage and in the gunfight with Detective Tapp. It is also briefly used by Alison Gordon (Monica Potter) when she grabs it during a fight with Zep. Adam (Leigh Whannell) briefly picks it up after killing Zep in the final act and tries point it at Jigsaw but gets shocked by a remote and drops it. Like Gordon's revolver, the "Protector" stays in the bathroom after the events of the film. 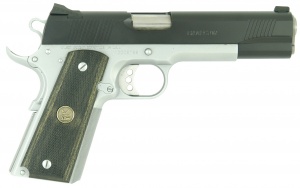 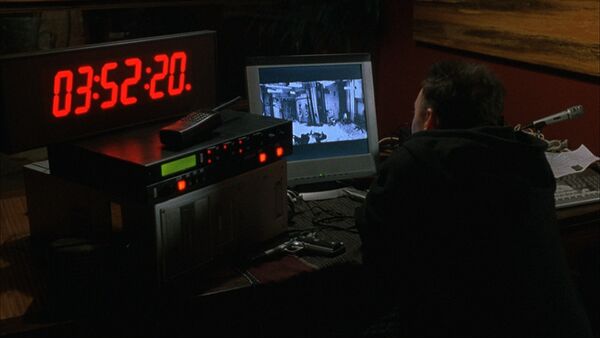 Zep watches the Bathroom Trap through a camera. His "Protector" lies next to him. 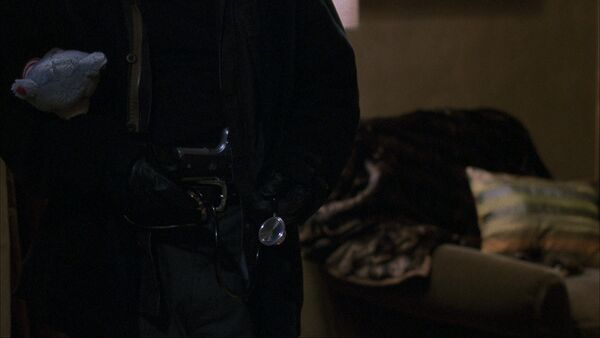 Zep's "Protector" on his belt. 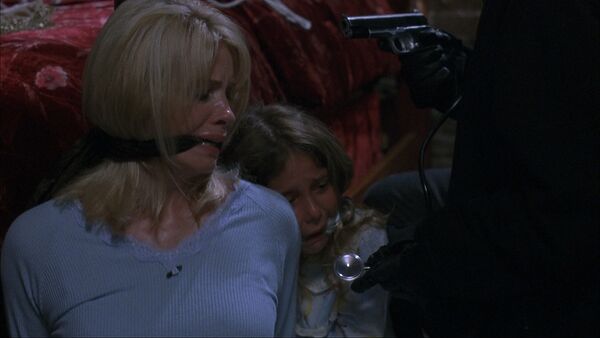 Zep threatens Alice with his gun.

Zep and Allison struggle over the "Protector". 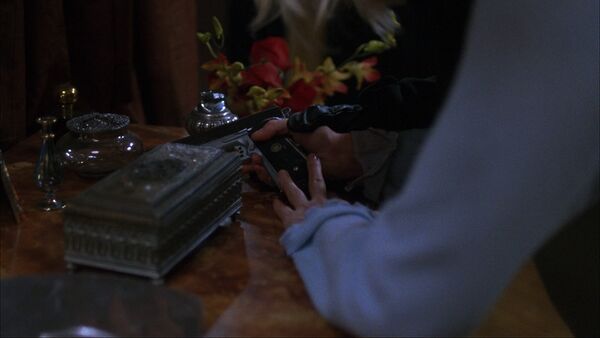 View on the frame of the pistol. The gun used in the film has the mag well removed to allow the use of standard 1911 magazines. 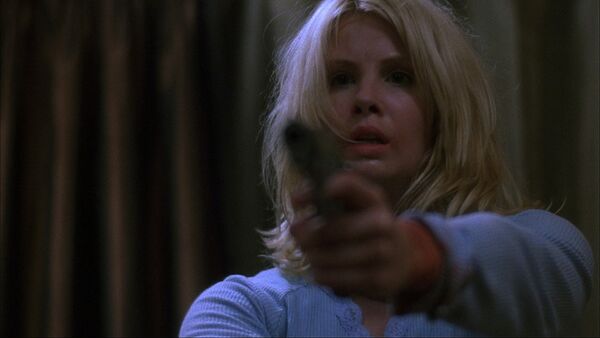 Alice takes the "Protector" during a fight with Zep. 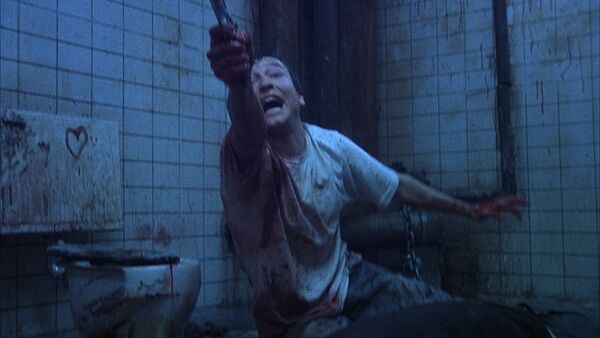 Adam wants to shoot John Kramer, but gets shocked by a remote.

During the flashback in which Detective Tapp (Danny Glover) and Detective Sing (Ken Leung) break into Jigsaw's (Tobin Bell) warehouse, Tapp is armed with a Zastava CZ99. 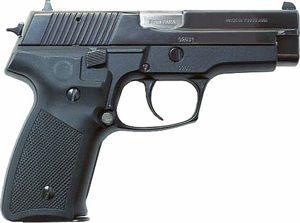 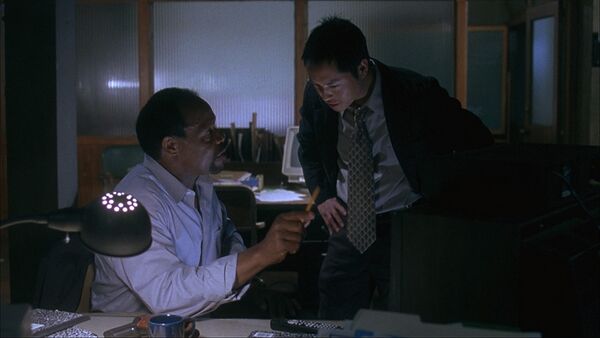 First, it's seen in a holster on his desk. 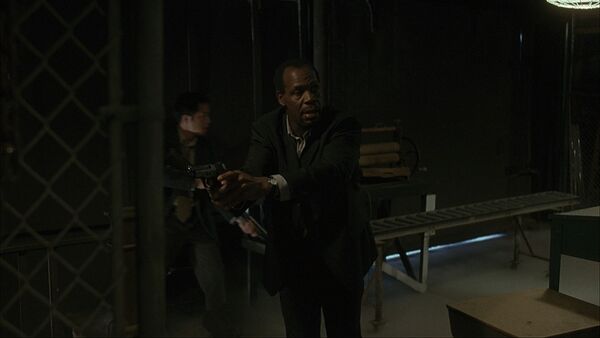 A shot showing the other side of the gun.

The detective gives the order to surrender. 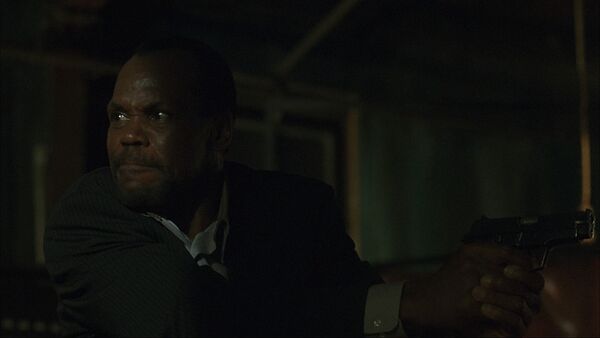 Tapp's CZ99. Note the ambidextrous decocker on the right side of the grip which differentiates the CZ99 from the SIG-Sauer P226 on which it is based.

While pursuing Jigsaw (Tobin Bell), Detective Sing (Ken Leung) is killed when he steps on a trip wire that is connected to four loaded 12 Gauge Double Barreled Shotguns that are mounted on the archway above him.

The shotguns sit above Sing before killing him. 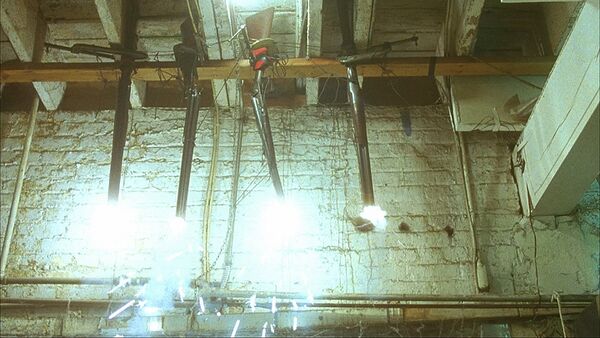 During the warehouse flashback, an Ithaca 37 Deer Slayer Police Special is used by both Detective Tapp (Danny Glover) and then by Detective Sing (Ken Leung) who both hold it on Jigsaw (Tobin Bell) before he escapes. After Tapp is wounded, Sing pursues Jigsaw with the Ithaca, and manages to shoot him in the back with it, before he is killed by a shotgun trip-wire trap.

Sing enters the warehouse with the Ithaca drawn. This shot was done in post-production, and this is actually Leigh Whannell, who portrays Sing in this scene. In the fullscreen version, you can actually see his whole face!

Sing aims the Ithaca at Jigsaw. 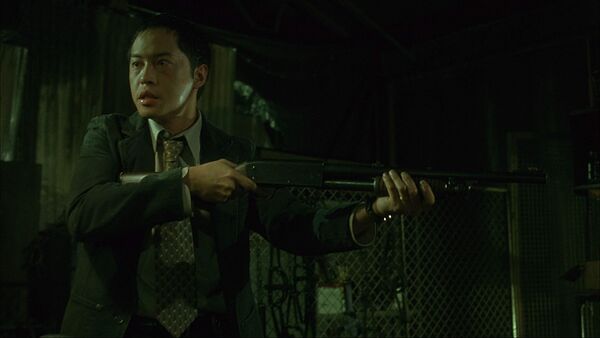 The side profile of Sing's Ithaca.

Tapp aims the Ithaca at Jigsaw. 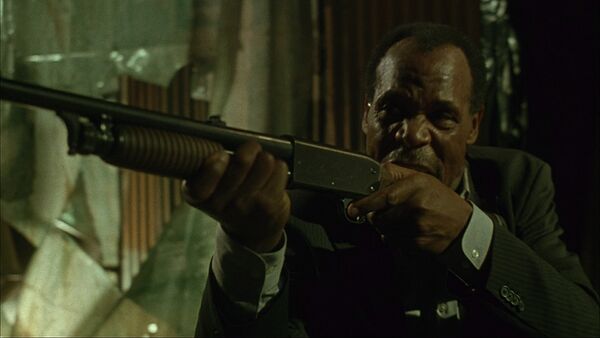 Tapp with the Ithaca. 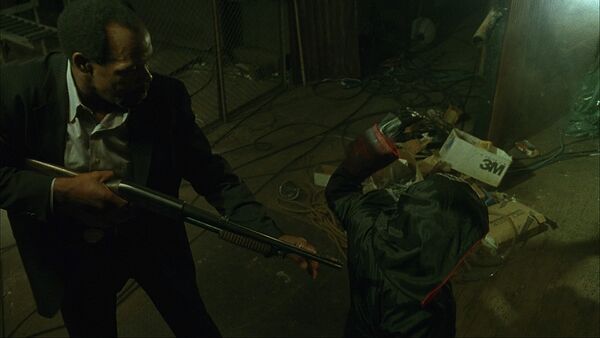 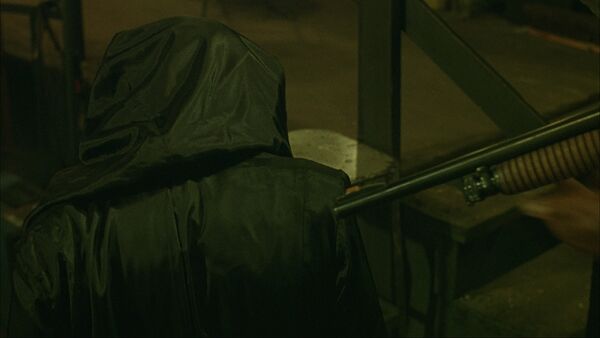 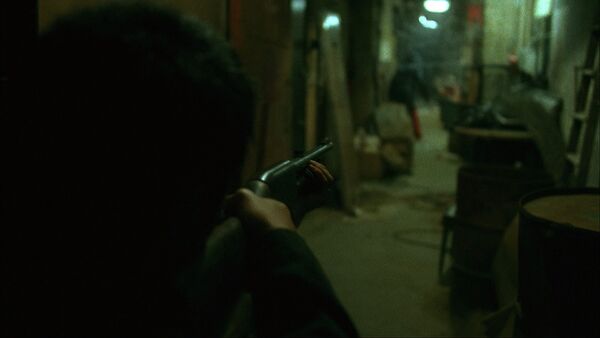 Sing pursues Jigsaw with the Ithaca. 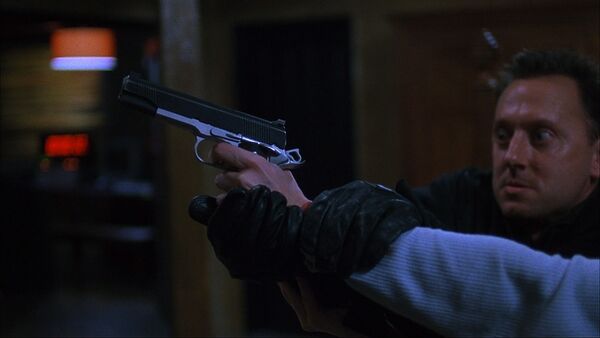 Sing chases Jigsaw in the hallway with a shotgun. 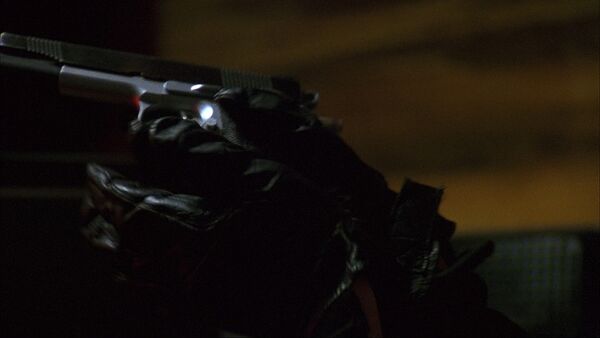 The dead body of Detective Sing in a newspaper photograph.

When the camera zooms in on one of the shotgun's triggers, the shotgun turns into a Winchester 1300 due a continuity error.

The camera zooms in on the trigger of a Winchester 1300. 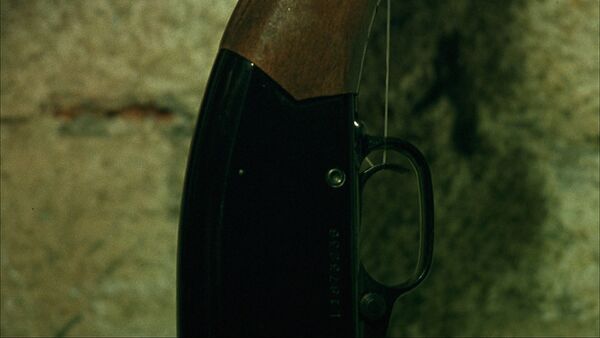