Jigsaw (also known as Saw VIII) is a 2017 American horror film directed by Michael and Peter Spierig and written by Josh Stolberg and Peter Goldfinger. It is the eighth installment in the Saw franchise. The film stars Matt Passmore, Tobin Bell, Callum Keith Rennie, Clé Bennett, Hannah Emily Anderson, Laura Vandervoort, and Paul Braunstein and was released in the United States on October 27, 2017, by Lionsgate.

10 years after Jigsaw's death, the police detain Edgar Munsen (Josiah Black), who warns them about a new game. After that, the police begin to find the dead bodies of the participants in the new game. As the investigation progresses, suspicions grow, as Detective Haloran is confident that the new accomplice himself works in the police. At this time, five players are trying to survive in a new series of deadly tests.

2010's Saw 3D was originally deemed the final installment of the series, before Lionsgate commissioned the production of Jigsaw from a pitch by Stolberg and Goldfinger. It will be followed by a ninth installment, Spiral, in 2021.

The following weapons were used in the film Jigsaw:

Unlike all other police officers, Halloran (Callum Keith Rennie) is armed with a Glock 17 throughout the film. First, he, along with the other cops, shoot criminal Edgar Munsen, which gives Logan a reason to accuse him of Munsen's death. After that, the pistol is seen several times in a holster on his belt and in the hands of Halloran during the raid on Eleanor's studio.

Halloran and other cops with Glocks.

Halloran with his Glock during the raid. 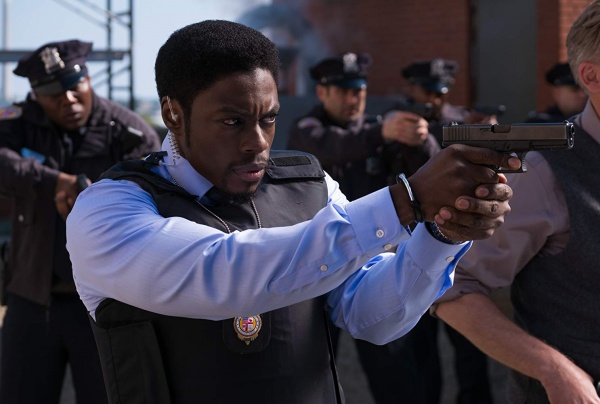 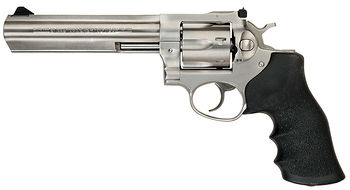 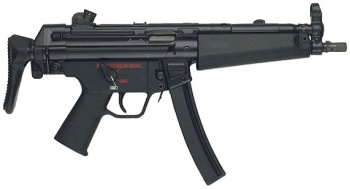 M4A1 carbines are carried by SWAT officers during the raid on Eleanor's studio.

The SWAT officer who rams down the door to Eleanor's studio has an M4A1 slung.

The SWAT officer behind Halloran holds an M4A1.

US Army soldiers are seen with Heckler & Koch HK416s in the picture when Halloran reads Logan's biography.

Halloran reads a report about Logan. Two soldiers pull back a wounded fellow soldier with HK416 rifles in their hands.

Jigsaw (Tobin Bell) uses a Sawed-Off Double Barrel Shotgun in the final test of the barn game, taking part in person. He loads the cartridge while explaining the rules (at the same time shocking all the viewers by his appearance), and then puts the gun on the rack. Anna (Laura Vandervoort) immediately grabs it, planing to shoot Ryan (Paul Braunstein), but the gun shoots backwards, killing her. Horrified, Ryan discovers that the phrase "buckshot is your key to freedom" was verbatim, retrieving the destroyed key to the shackles.

One of the SWAT officers is briefly seen with a Remington 870 Police in his hands.

The Remington in the hands of the SWAT officer.

A SWAT squad ready to storm a building.

Logan (Matt Passmore) fires an Accuracy International Arctic Warfare Police at Edgar Munsen (Josiah Black). During the autopsy, he replaces a 7.62x51 bullet with a 9x19 bullet, knowing that only Halloran use a 9mm pistol, framing him.

View of Edgar through the scope.

Close-up of a rifle before firing.

After the shot, he folds up the bipod and quickly leaves the location.