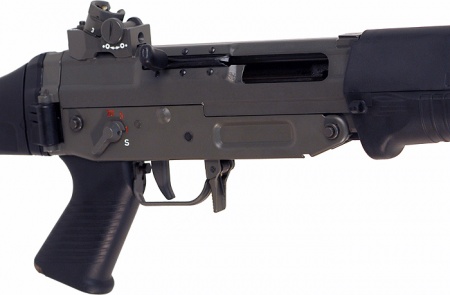 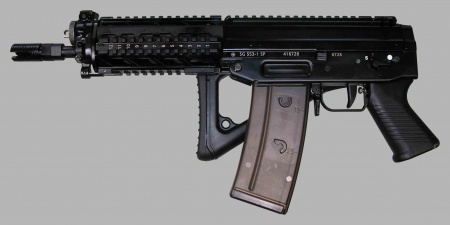 Spring JP Air Sports Combat 912A, an airsoft replica of the SIG SG 550

The Easier way to tell is that the 552 has fixed iron sights and a removable rail (locks into a lug at the front of the reciever, and a bolt extends into the rear sight), whereas the 552 has a fixed rail that conceals folding sights. Oddly the above picture is the one used on the Swiss Arms website for the 553, so someone there dosen't know the difference either. --commando552 04:08, 1 September 2011 (CDT)

I can't believe it took me so long to notice, but neither of these weapons are actually the SG 553. One way to tell is that the 553 is also fitted with a Brugger & Thomet (same company that makes the rail systems I believe) flash hider that allows for quick mounting of a suppressor. The other much more obvious way to tell is that the gun has SG 552-2 written on the side. I didn't realise this version existed, but apparently it does, and as far as I can tell the SG 552-2 is a flat top version of the 552 with folding BUIS, sa appart from the bolt and flash hider (although that can be switched) is identical to the 553. For example, one can be seen in The Unit before the 553 was released in 2009 (also has the 552 type charging handle). Below is the only non airsoft picture I can find of a 553, which is the semi auto version. --commando552 12:32, 21 September 2011 (CDT)

- The difference between these two guns is mostly internal (552: gas piston fixed to bolt, main spring behind bolt, 553: separate gas piston, main spring in front of the bolt). Yet, they are still different guns - which is why I'd suggest to list them as such. Rather, long- and short-barrel version should be distinguised (available for 551, 552 and 553). By the way, the 552 ceased production in 2008, the design was - by Swiss standards - faulty. - The flash hiders are not charateristic to the 552 and 553 versions - both the standard Swiss flash hider (as found on the standard issue SIG 550) as well as the Rotex flash hider could/can be ordered for either rifle. For both versions, Brügger&Thomet builds supressors, although it is said that the Rotex versions "fit better". Rotex equipped guns are however known to be VERY loud unsuppressed (and are therefore referred to as "tuning forks" in Switzerland). - Also, both versions could/can be ordered flat-top or with fixed iron sights. --MoustiqueCMD 18.06, 11 May 2014 (CET)

I have a couple of quick points/questions. Firstly, I don't think it is really necessary to add on to pages that it is a short barrel version of the 551/552/553, as the short barrel is the standard version with the LB being the variant (and as far as I know none of these long barrel version have appeared in anything anyway). Also, are you sure that they make a version of the 553 with fixed iron sights, as I have never seen one and to be honest I can't really understand why they would bother. The closest I can find are US "pistol" versions that have fixed sights and label themselves as the 553, but they clearly aren't as they have the 551-A1 lower and I would guess the upper is cobbled from another variant. About the flash hiders you say that you can order either the Rotex or the standard 550 flash hider for the 553, but I do not think that either of these were available on the 552 were they? I think all the 552s had that open pronged flash hider with the tapered back (distinct from the pronged Rotex which is ribbed and has a nut at the back) and this is not used on the current 553, which means that if it appears that is indicative of the earlier 552 is it not? Last thing about the flash hider, on a number of pages you have stated that it has a Rotex flash hider, but it all cases it clearly has the standard 552 one, which isn't a Rotex is it? Or am I misunderstanding what the various flash hiders are called? --commando552 (talk) 18:16, 13 May 2014 (EDT)
Edit: I finally managed to find a pix of a genuine 553 with fixed iron sights, turns out Punjabi SWAT use SG 553 LBs with fixed sights. --commando552 (talk) 18:29, 13 May 2014 (EDT)

BTW, the "XTreme Armor" logo might be the most ridiculous branding I've ever seen on a piece of LE/military equipment. It looks like it belongs on a skateboard or a bag of chips.

On that: -- short vs barrel version: okay, agreed. Although the difference is profound. -- version of the 553 with fixed iron sights: I guess that was answered before I could upload the scan of the 2009 Swiss arms catalogue. Anyway, on the subject why the bothered: Because the diopter sights are brilliant ;-). -- Flash hiders: I have to admit I misunderstood this. From what I found out, there are four factory flash hiders for the 55x-series: standard, the four-pronged (useless, therefore to my knowledge no longer available), the threed-pronged (replacment for the useless one) and the Rotex one (which makes sense if you want to use a silencer). Note quite certain which version was/is available for which gun - I'll do some more research and update the respective pages accordingly once I find out more. --MoustiqueCMD 17.16, 17 May 2014 (CET)

I unfortunately failed to find out much more about the flash hiders. A 2008 Swiss Arms catalogue I found only mentions the three-pronged one. Famous Swiss gun maker Brügger&Thomet apparently offered shortened versions as well (cut-down 550s, I suppose, which were equipped with Rotex flash hiders. Anyway, I did update the pages I edited accordingly. --MoustiqueCMD 16.24, 25 May 2014 (CET)

Does anyone know if the uppers for, say, an SG552 and a SG556 pistol are interchangeable? I ask because was looking at the SG553 in Salt, and realised that the upper on it is identical to that of the SG556 SWAT pistol, which has a different front sight and flash hider to the SG553. Furthermore, the gun in Salt has a jet black upper, but the lower is the regualr SIG grey implying that it is built from two different guns. Below is a shot of the gun from the The Specialists Ltd's website, who supplied the guns for this film, and they list it as an SG552, which from the charging handle it definitely isn't. The uppers of the two guns look the same shape, but are there less obvious differences that would make swapping them a no go? Also, would I be correct to assume that a US company would have an easier time fitting a 556 upper to a 550 series lower rather than getting a 553? --commando552 18:01, 10 October 2011 (CDT)

Also, SG 750 is the full auto version, SG 751 is the civilian semi auto version. When it was initially designed back in 2005 it seemed to go by either SAPR (Swiss Arms Precision Rifle) for the long barrel version or SAPK (Swiss Arms Precision Kurz?) for the short barrel. I think this distinction has been abandoned and all are now called the SAPR, as there are 5 different barrel lengths available. I think the picture on the main page is of the old version of the SAPK (lower receiver has since changed), but not sure since the barrels are now different lengths. --commando552 04:48, 11 February 2012 (CST)

Why does it seems this is every gun-for-hire has this gun? And if its not this its a g36 or ak.DRC92 (talk)