The Ringer (Der Hexer ("The Warlock")) is a 1964 German detective movie directed by Alfred Vohrer and adapted from the 1925 novel "The Ringer" (originally released as "The Gaunt Stranger") by Edgar Wallace. A notorious criminal Arthur Milton known as "The Warlock" ("The Ringer" in the original novel) who had escaped from Britain to Australia returns in London after his sister is murdered. Inspector Higgins (Joachim Fuchsberger) investigates the case, teaming with the retired detective Warren (Siegfried Lowitz). Warren is the only man who knows the real face of "The Warlock", a master of disguise.

The film is the seventeenth installment in the Rialto Film studio film series (1959-1972) adapted from the novels of Edgar Wallace, and the sixth screen adaptation of the original work, following 1928, 1931, 1938 and 1952 British films and 1932 German film. In 1965 the film was followed by a direct sequel Again the Ringer.

The following weapons were used in the film The Ringer (Der Hexer):

Higgins holds his revolver when searching for the suspect in the airport.

Wesby holds his revolver in the scene in sewers.

Hopkins is gunned down.

Wesby holds his revolver in the scene in the hotel.

Higgins holds Wesby at gunpoint in the final scene. 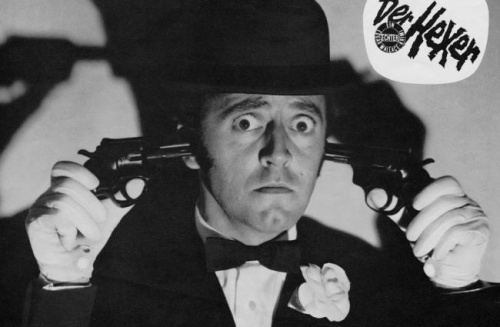 Archibald Finch (Eddi Arent) plugs his ears with the barrels of HW-1 revolvers on a promotional image (this character doesn't hold any firearm in the movie). 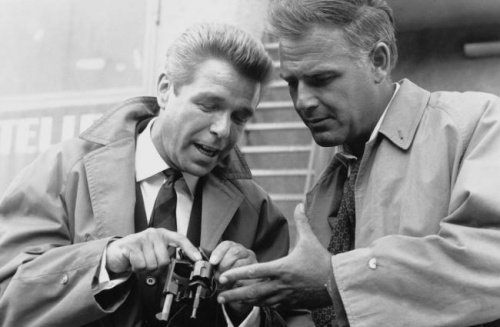 Heinz Drache and Joachim Fuchsberger examine a revolver during the film set. 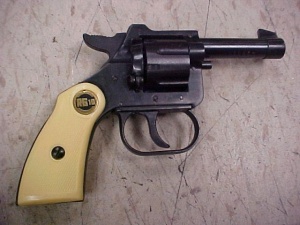 Cora Ann Milton draws a revolver from her purse. The gun has nickel finish and white, likely pearl grips.

Wesby presses the extractor of Cora's revolver in order to examine the ammo.

Inspector Warren (Siegfried Lowitz) holds an over and under combination rifle/shotgun with the sniper scope in one scene. Note: the same gun is better seen in the 1965 sequel.

Warren appears in the window with the gun. Note that the bottom barrel is thiner than the top one.