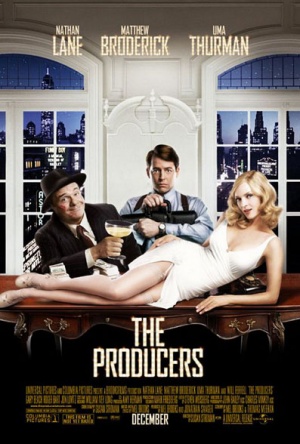 The Producers is the 2005 film adaptation of the 2001 Broadway musical, which itself was based on Mel Brooks' 1968 movie of the same name. The film's cast included Matthew Broderick and Nathan Lane (reprising the roles they originated on Broadway), as well as Will Ferrell and Uma Thurman.

The following weapons were used in the film The Producers:

Franz Liebkind (Will Ferrell) brandishes a Luger P08 when confronting Max Bialystock (Nathan Lane) and Leo Bloom (Matthew Broderick) after seeing his play. Both Max and Leo are seen handling the weapon as well. Franz is later seen firing more than eight shots with it even though the real Luger P08 has an eight round magazine.

Franz Liebkind (Will Ferrell) with the Luger.

NYPD officers who burst in are armed with Colt Official Police revolvers.