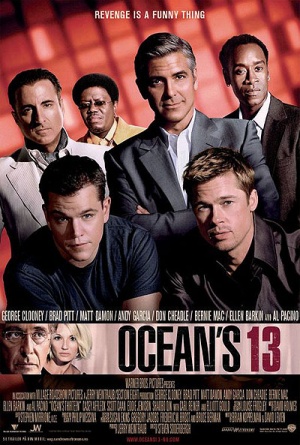 Ocean's Thirteen is the third film in the Ocean's Eleven trilogy. Steven Soderbergh returned to direct the 2007 sequel, which finds Danny Ocean (George Clooney) devising a scheme to avenge their friend Reuben (Elliott Gould), who was swindled by unscrupulous casino mogul Willy Bank (Al Pacino). The majority of the cast of the previous two films return, including Brad Pitt, Matt Damon, and Don Cheadle.

The following weapons were used in the film Ocean's Thirteen:

A Glock 17 is carried by the FBI agents, including Robert Caldwell (Bob Einstein), when Linus (Matt Damon) is confronted in the diamond room at the top floor of the hotel owned by Willy Bank (Al Pacino).

François Toulour (Vincent Cassel) draws a Walther PPK/S on Linus in order to take the diamonds he is carrying.

Linus (Matt Damon) is threatened with the PPK/S.

Linus discovers the true danger of the PPK/S.