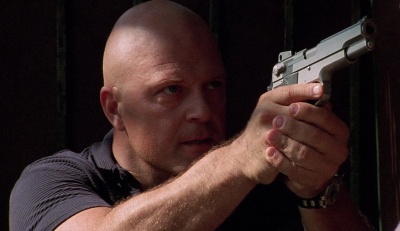 Michael Chiklis as Det. Vic Mackey with a Smith & Wesson 4506 in The Shield.

Michael Chiklis is an American actor who first gained notice for his portrayal of the comedian John Belushi in the 1989 film Wired. He would later become well known to television audiences for his law enforcement roles, namely as Commissioner "Tony" Scali in the series The Commish and then as Detective Vic Mackey in The Shield, a role for which he received a Primetime Emmy Award for Outstanding Lead Actor in a Drama Series. In films, he has appeared in such features as Parker, Eagle Eye and notably as Ben Grimm, aka "The Thing", in two Fantastic Four feature films.