From Internet Movie Firearms Database - Guns in Movies, TV and Video Games
(Redirected from The Shield)
Jump to: navigation, search 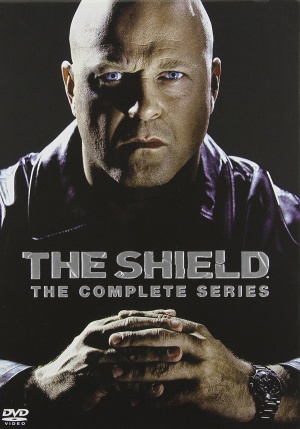 The Shield was a television crime series that starred Michael Chiklis as Vic Mackey, a Los Angeles police detective who played both sides of the law as the leader of an undercover strike team which also happened to have its hands in several illegal operations throughout the city. Benito Martinez co-starred as David Aceveda, an ambitious captain intent on bringing Mackey to justice while being the commanding officer of the police station they both work out of. The cast included Walton Goggins, Kenneth Johnson, Michael Jace, and CCH Pounder and Chiklis would subsequently receive a Primetime Emmy Award for Outstanding Lead Actor in a Drama Series. The Shield was created by Shawn Ryan (The Unit) and encountered controversy for pushing the limits on its level of violence, language and nudity (an amount that at the time had not been seen in the US on a basic cable network). The Shield ran for seven seasons on the FX channel from 2002 to 2008.

The following lists the seasons of the series The Shield: