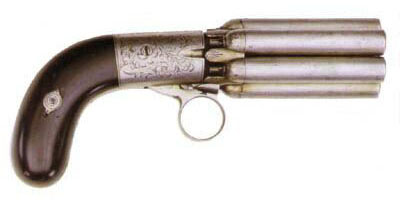 Mariette Pepperbox is a family of percussion cap pepperbox revolvers, designed by Belgian arms manufacturer Mariette (various sources name Gilles Mariette or Guillaume Mariette both of whom were gunsmiths of same era). Six-barrel version was most common, but various models from four to twenty-four barrels also existed. A feature of all Mariette pepperbox guns is a ring trigger.

They should not be confused with J.R. Cooper pepperboxes, which are similar in appearance, but have a some of differences, such as a different shape of the barrels block.

The Mariette Pepperbox and variants can be seen in the following films, television series, video games, and anime used by the following actors: