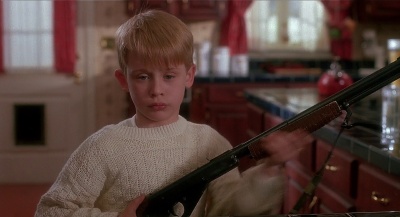 Macaulay Culkin as Kevin McCallister gets ready to use the BB gun in Home Alone.

Macaulay Culkin is an American actor who is best known for his role as Kevin McAllister in the films Home Alone and Home Alone 2: Lost in New York. He also is the brother of actors Kieran Culkin and Rory Culkin.