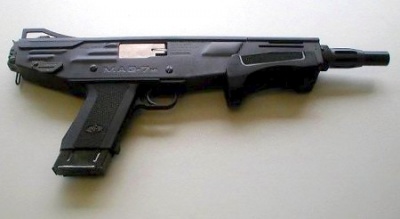 The Techno Arms MAG-7 is a rather bizarre South African pump-action combat shotgun. Resembling an extremely beefy Uzi (it is only slightly smaller than an M1A1 Carbine with the stock folded), the weapon fires special 60mm (2.3622 inch) length 12-gauge shells from a detachable magazine about the size of a 30-round 5.56mm STANAG which is inserted into the pistol grip: as a result the grip is extremely thick.

The basic version sold in South Africa either had no stock at all or an Armsel Striker-style folding stock, but to comply with US import laws the MAG-7M1 was developed. This variant mounted an incredibly dorky-looking fixed wooden stock along with an extension to increase the barrel length to the required 18 inches. Techno also made an even stranger variant, the "dual riot," which mounts a 37mm top-break flare launcher on top of the MAG-7 and has an odd, vaguely futuristic-looking stock.

The weapon was never particularly popular due to a perceived lack of need, use of proprietary ammunition, and the bizarre placement of the safety, with the controls for this on the rear of the frame on the right and on the left in a location only within easy reach for a left-handed shooter. As a note, it is actually correct to show poor trigger discipline when operating the action of this weapon, as it was designed to be operated with the shooter's finger on the trigger. Since the forend is pumped back far enough that it partially covers the trigger guard, trying to rest a finger on the side of the trigger guard will result in slamming the back of the forend into it.

The MAG-7 pump-action shotgun appears in the following: