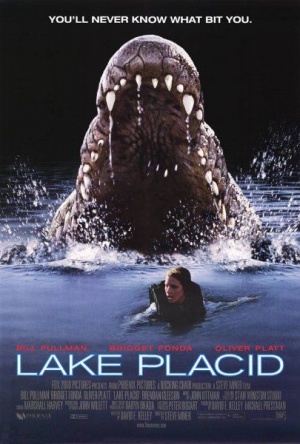 Lake Placid is a 1999 adventure horror film that revolves around the citizens of a small town who must stop the newly discovered 30 foot crocodile that terrorizes their lake. The film would spawn several television film sequels that premiered on the Sci-Fi (later SyFy) channel. In 2015, the SyFy channel would premiere Lake Placid vs. Anaconda, another television film that crossed over this series with the Anaconda film franchise.

The following weapons were used in the film Lake Placid (1999):

A few Winchester Model 70 rifles can be seen in the possession of multiple law enforcement officers in the film. Sheriff Keough (Brendan Gleeson) and other individuals can be seen toting Model 70 rifles as the small group searches for the crocodile and discovers the head of their fellow officer. Deputy Sharon Gare (Meredith Salenger) can be seen with one of these rifles near the end and uses it to fire at least one shot at the crocodile when it charges the truck.

The deputy to the left of Sheriff Keough (Brendan Gleeson) carries a Sako rifle.

The deputy on the right carries the rifle.

Sheriff Keough (Brendan Gleeson) arms himself with a Cobray M79LF 37mm Launcher with a custom long barrel (calling it a "Light Weight Forward Area Air Device Unit"). "Whatever's out there, one shot with this and its dead." He ultimately uses it to dispatch a Crocodile.

Keough assembles his Cobray Launcher in preparation for capturing the animal.

"Something tells me that everything is just perfectly safe..." Sheriff Keough (Brendan Gleeson) with his Cobray M79LF 37mm Launcher.

In the climax of the film Jack Wells (Bill Pullman) is seen using a Palmer Cap-Chur Long Range Projector to calm down the male crocodile.

Jack Wells (Bill Pullman) carries a Mossberg 500AT shotgun when his groups is hunting for the crocodile and come across the deputy's head and footprint of the crocodile.

Jack Wells (Bill Pullman) walks with his Mossberg 500AT Shotgun.

Sheriff Keough (Brendan Gleeson) carries the Taurus Model 66 revolver as his sidearm, and pulls it out and inadvertently scares Hector Cyr when he investigates sounds in the forest. 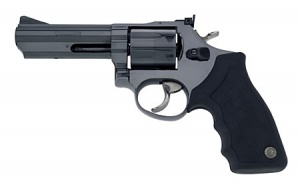 Sheriff Keough (Brendan Gleeson) shows off his Taurus Model 66 to Hector after they argue - .357 Magnum.

Deputy Sharon Gare (Meredith Salenger) fires a blued Ruger Security Six out of Hector's helicopter window when one of the crocodiles attacks it.

Sharon aims at the crocodile.

Jack Wells (Bill Pullman) uses Smith & Wesson Model 586 near the end of the film and fires six shots at the crocodile as it approaches Kelly.