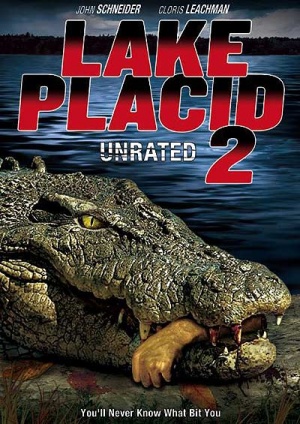 The following weapons were used in the film Lake Placid 2:

The big game hunter/poacher Struthers (Sam McMurray) carries an Italian Franchi SPAS-12, which he even refers to as a Franchi SPAS-12 in the film. He also mentions how the acronym stands for "Sporting Purpose Automatic Shotgun". His tube magazine is shorter than standard, appearing to hold less than the standard 8 shot tube of the SPAS-12. He only uses it once and changes over to the Browning A Bolt Shotgun for the rest of the film. 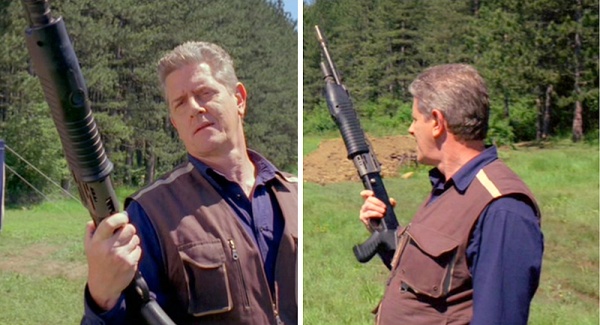 "It's called SPAS-12! SPAS! Sporting Purpose Automatic Shotgun! That's known as an Acronym! You know what an Acronym is?" 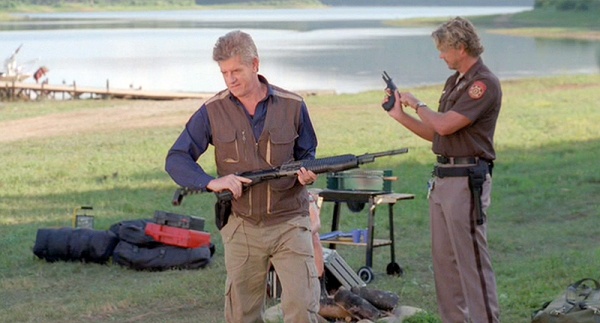 Struthers (Sam McMurray) walks off with his SPAS-12 - 12 gauge 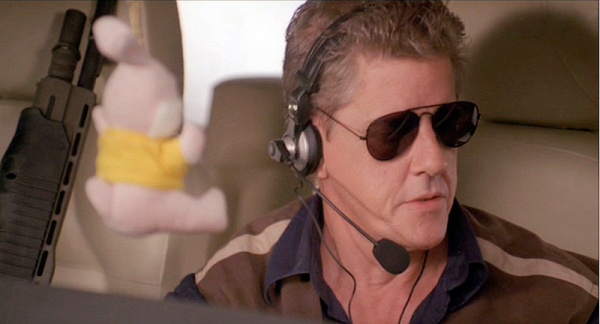 Sheriff Riley (John Schneider) is seen carrying a Mossberg 500 Persuader at one point in the film, in which Struthers brags his SPAS-12 is bigger. Riley rarely uses the Mossberg, instead going for the fictional 40mm grenade launcher for the rest of the film. 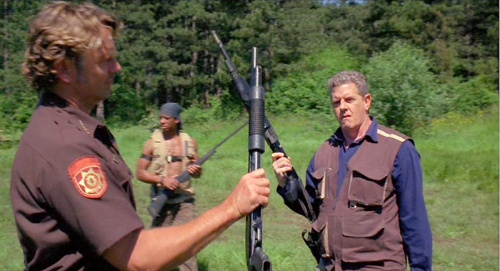 Riley grabs his Mossberg 500 "Cruiser" - 12 Gauge. Struthers says "Mine is bigger than yours!"

Struthers (Sam McMurray) brings several Browning A-Bolt Shotguns. The bore and magazine plate indicates it is indeed the shotgun version, which is a rare variant of the A-Bolt no longer in production, and the film has at least two of them. Struthers' assistant Ahmad (Joe Holt) carries it when Struthers carries the SPAS-12. Emily (Sarah Lafleur) and Sheriff Riley (John Schneider) also uses the gun. 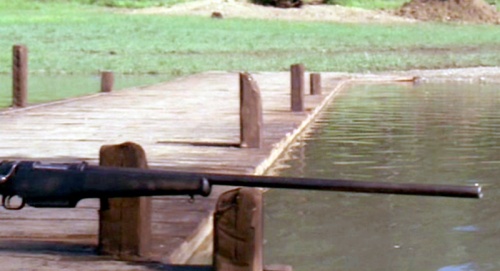 The Browning A Bolt Shotgun sits on the dock - 12 gauge. 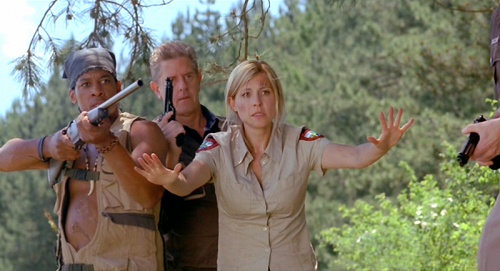 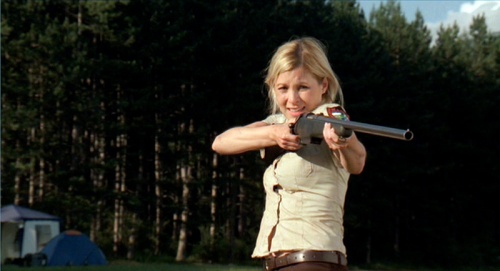 Emily (Sarah Lafleur) tries to aim the Browning Shotgun, but not very well. 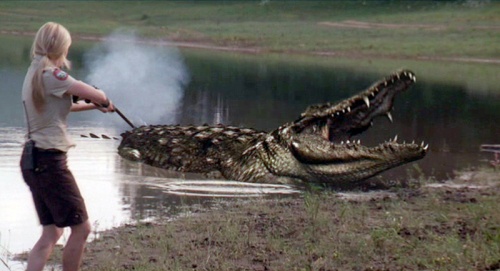 Emily (Sarah Lafleur) reacts to the giant crocodile on the lake. 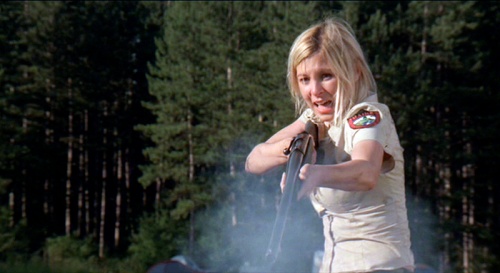 Seen stacked against the wall behind Frank as he makes his statement. 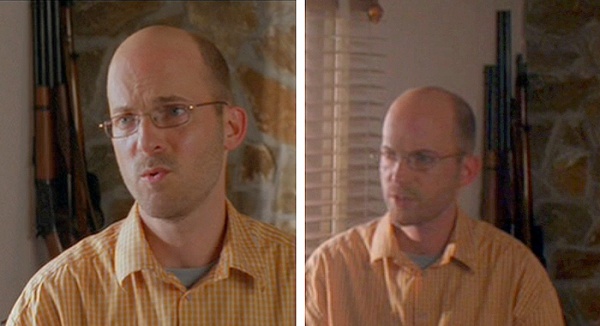 A Steyr Mannlicher M95/30 is seen among the long guns stacked up a wall.

A Steyr Mannlicher M95/30 short rifle is seen stacked against the wall behind Frank as he makes his statement.

Among the weapons seen in the Aroostook County Sheriff's office appears to be a Winchester Model 1894 rifle. 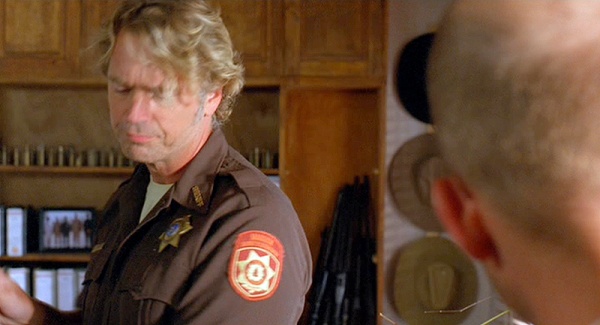 Sheriff Riley stands in front of a wall cubby hole with rifles and carbine careless stacked. In reality, no police or sheriff station would store guns in a loose pile like that. Identification not easy since they are obscure.

A Marlin 336C is seen among the long guns stacked up a wall.

Frank (Robert Blush) reports to the Aroostook Sheriffs Department that his friend is dead. Stacked on the wall behind him (with full accessibility to the public since it is against the back wall where the public walks into the building), are several long guns - the Marlin 336C Carbine, the 12 gauge O/U shotgun and a Steyr Mannlicher M95/30 Short Rifle.

Struthers (Sam McMurray) carries a Beretta 92FS pistol as his sidearm, as does Sheriff Riley (John Schneider). The gun appears to be a flashpaper gun, but since other guns in the film fire blanks, it can be assumed it was due to lack of a better prop instead of sound ordinance. 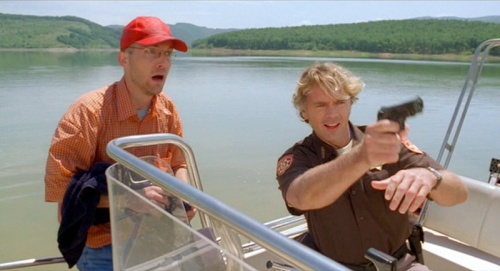 Riley aims his Beretta 92FS. From this angle it looks like a Centurion, but in other shots it is a 92FS. 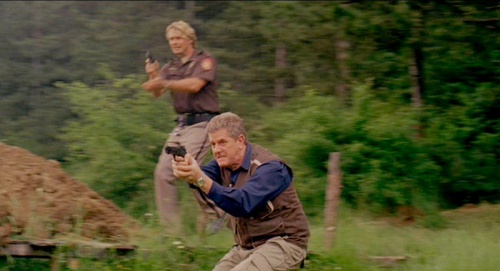 Struthers and Riley fire their Beretta 92FS pistols to no effect against the giant crocodile. 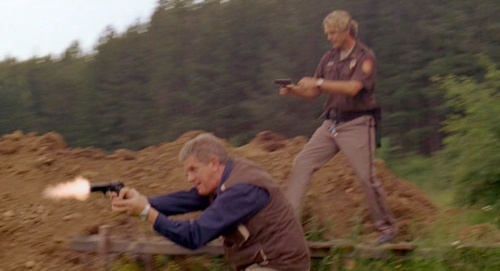 What makes viewers think they are either "flash paper guns" or replicas that are being 'mime fired' with the flash and smoke added in later with CGI effects, is that there is no recoil, no movement of the slide and no spent shell casings when they are fired. In this shot they appear to be CGI generated flashes as the actors "Mime" fire. 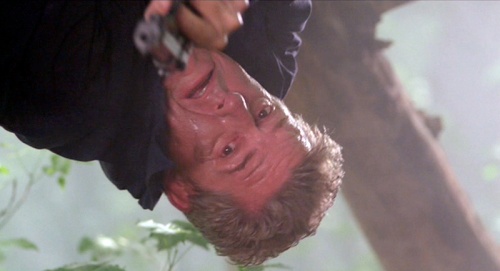 Struthers falls out of a tree and gets caught hanging upside down. Sure enough, when he is trapped upside down, a giant crocodile attacks and Struthers pulls his Beretta 92FS.

Aroostook County Sheriff Riley (John Schneider) uses a multibarreled launcher that referred to in the film as a "Milkor MG-340". In reality, this launcher is a Cobray M79LF 37mm Flare Launcher mocked up with a fake scope and an added on cylindrical drum to resemble a Milkor MGL, but making it look a lot like a Sentinel Arms Stryker). At one point in the film, the launcher's true identity is seen as Riley opens up the tube of the launcher, which moves the drum along with it. 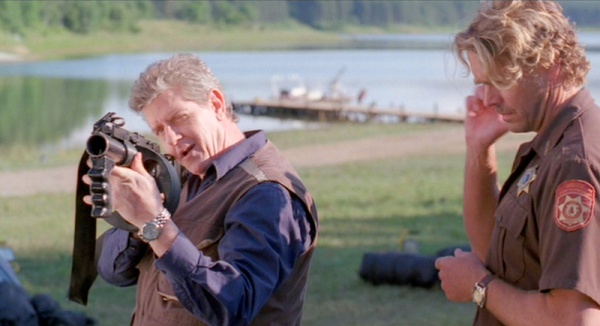 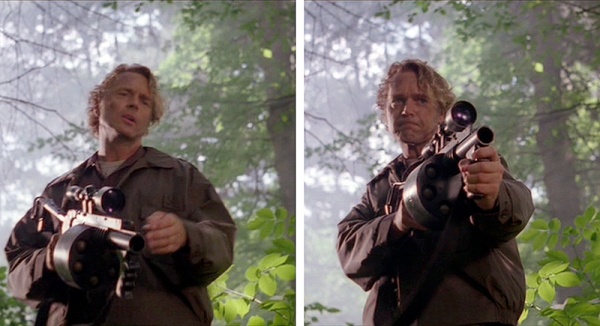 Sheriff Riley (John Schneider) uses a Cobray M79LF 37mm Flare Launcher that is mocked up to look like a Rotary 40mm launcher - 37mm. 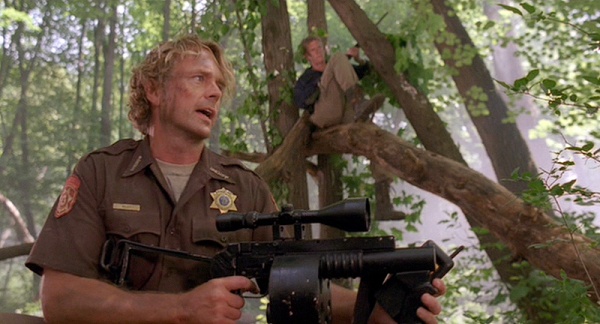 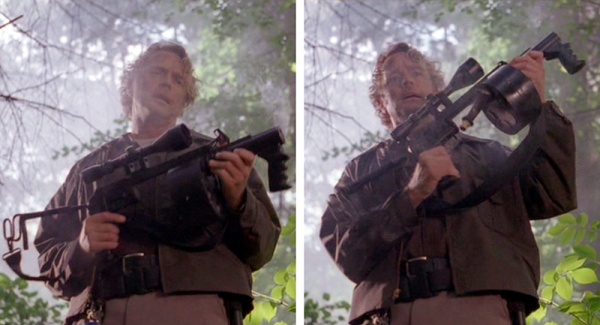 A sequence of shots where Riley is seen opening the slide of the M79LF and pop out the special effect Pyrotechnic charge after firing it. If this was truly a rotary launcher, the spent round would have just rotated to another position.