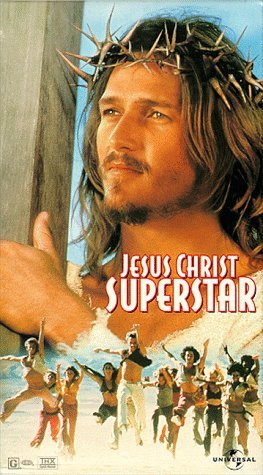 Jesus Christ Superstar is the 1973 film adaptation of the Andrew Lloyd Webber stage musical of the same name. Directed by Norman Jewison (In the Heat of the Night), the rock opera tells the last weeks in the life of Jesus Christ leading up to the Crucifixion. The film contains many intentional anachronisms, including the wearing of modern day clothes and the use of firearms. Actors Ted Neeley (Jesus Christ) and Carl Anderson (Judas Iscariot) received Golden Globe nominations for their performances as well. The movie was shot in Israel with the cooperation of the Israeli Army. In one memorable scene, Judas is seen haunted by his conscience which takes the shape of five Israeli "Sho't"-tanks (Centurion). The movie was shot in 1972, primarily around the ruins of Avdat (southern Israel).

The following weapons were used in the film Jesus Christ Superstar:

While some Roman soldiers and temple guards are seen with spears and swords, many are seen carrying MP40 submachine guns.

In the film's prologue, the actors unload props from their bus including two MP40 submachine guns.

Two Roman guards, middle and left, carry the MP40. The left guard doesn't hold it in a combat ready manner.

A Roman soldier behind Jesus (Ted Neeley) carries an MP40.

A Roman patrol escorts Jesus (Ted Neeley), one soldier has an MP40.

Uzi submachine guns are also carried by some Roman soldiers and temple guards.

A Roman soldier wields an Uzi.

A Spanish Alfa M44 light machine gun is displayed at a marketplace. The weapon was used by Spain and Egypt. The original caliber were 7.92×57mm though the Spanish later converted the weapon to 7.62mm NATO while Egypt retained the 7.92×57mm. It is probable the movie weapon was originally captured by the Israelis in the Egyptian-Israeli wars. Also in the background are two other weapons on a rack, the bottom one looks to be an MG34 and the top an FN FALO.

The arms vendor demonstrates how to operate a machine gun.

At the marketplace, Jesus (Ted Neeley) picks up a Martini-Henry and smashes merchandise on a display table. The long reloading lever is visible. It is most likely a carbine version of the M-H as it is shorter than the standard version shown below.

Jesus (Ted Neeley) holds the rifle, preparing to strike. The classical Martini-Henry loading lever has been knocked loose and is barely visible.

Another shot of the rifle and the loading lever which has come undone after the first hit.

During the incident in the temple several hand grenades are seen. At least one of them is a vintage British "Mills Bomb" which served in two world wars. It is possible the grenades are leftovers from the British Mandate of Palestine (modern-day Israel).

A stack of grenades of multiple variants are seen on the table and on the scale.

Closeup of the same pile of hand grenades. The darker colored grenade is a Mills Bomb.

In the temple a Lewis Gun is seen on the ground to the left of the scale.

Judas (Carl Andersson) is haunted by his inner demons which takes the form of five Israeli "Sho't" tanks (upgraded British Centurions). In October of 1973, these very same tanks would be engaged in the conflict that would be named the Yom Kippur War.