Elizabeth Tulloch is an American actress best known for role of Juliette Silverton in the NBC television series Grimm (2011-2017) as well as Lois Lane in the CW's Supergirl and Superman & Lois. She is married to actor David Giuntoli and they have a daughter together. 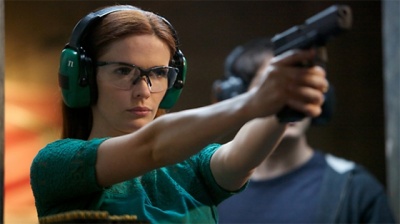 Elizabeth Tulloch holds a Glock 17 as Juliette Silverton in Grimm.