Deadlier Than the Male 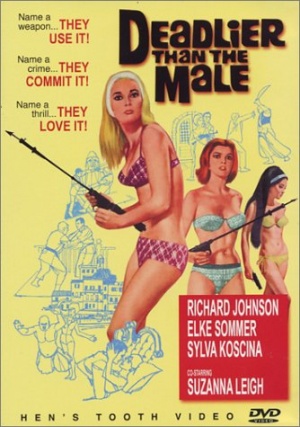 Deadlier Than the Male is a 1967 British film featuring the character of agent Bulldog Drummond (Richard Johnson), which is assigned to stop a master criminal Carl Petersen (Nigel Green), who uses beautiful women to do his killings.

The following weapons were used in the film Deadlier Than the Male:

One of King Fedra's guard aims his gun on Irma and Penelope.

Wyngarde keeps a Smith & Wesson Model 10 near him on the beach in the Mediterranean while he records a message for Drummond.

One of Petersen's henchmen is armed by the MP41 submachine gun.

Irma Eckman (Elke Sommer) shoots a tranquilizer dart from a Diana 5G Air Pistol to incapacitate Carloggio on the street outside Drummond's apartment.

Irma (Elke Sommer) and Penelope (Sylva Koscina) use a spear gun to kill Wyngarde at his seaside villa.