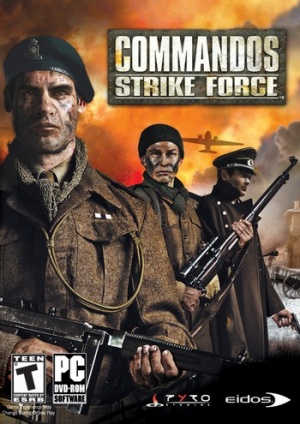 Commandos: Strike Force is the fifth game in the Commandos series. This is the first (and so far only) Commandos game to be a first-person shooter, all the previous entries used the overhead perspective. The game was developed by Pyro Studios and published by Eidos in 2006 for the PC, Xbox and Playstation 2.

The following weapons can be seen in the game:

The Colt M1911A1 (simply called the "Colt" in-game) is one of the game's usable sidearms. It holds 7 rounds, and is mainly used by the Green Beret. 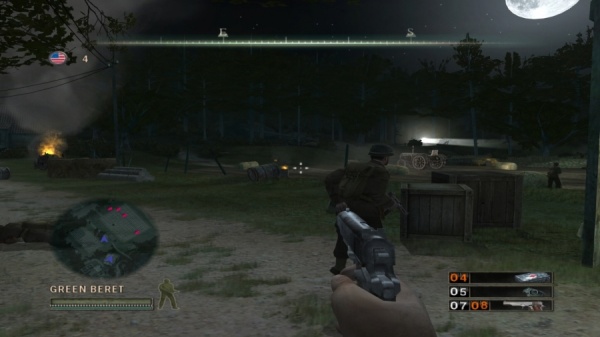 The Colt M1911A1 in first-person. Note the incorrect uncocked hammer, which would render this single-action-only pistol unable to fire in reality.

A suppressed Walther PPK is the preferred sidearm of the Spy in the game. It is referred to simply as the "Walter" (without the H), and holds 7 rounds. 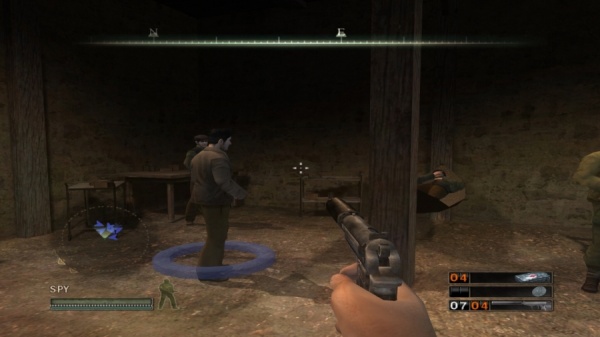 The Spy holding a Walther PPK in-game. Note the uncocked hammer; while the PPK can fire like this, the hammer should remain cocked after the first shot, which it doesn't in-game.

The Luger P08 appears as the "Luger" in Strike Force, and is often used by the Sniper as a secondary weapon. It erroneously holds 12 rounds. 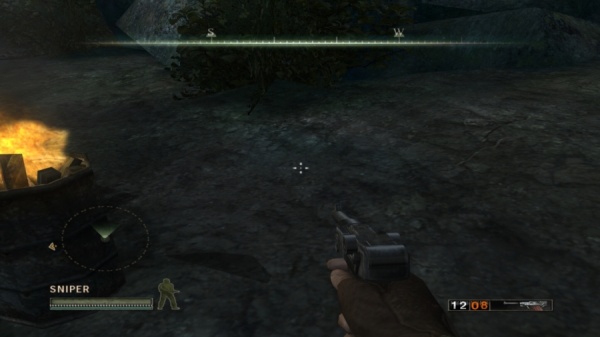 The Luger P08 in the fingerless-gloved hands of the Sniper.

The Thompson M1A1 (simply called the "Thompson" in-game) is the default submachine gun of the Green Beret in the game. It always appears with 20-round box magazines in-game. 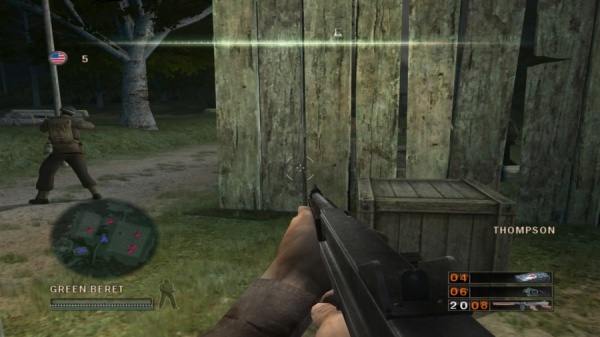 The Green Beret decides to see if he can hit the broad side of a barn with his Thompson..

Most German soldiers use MP40 submachine guns throughout the single player campaign. The Green Beret and Spy can use them, but the Sniper can't. It correctly holds 32 rounds. 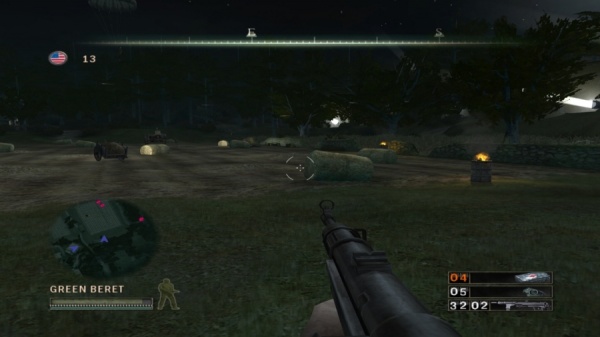 The MP40 in first-person. Note the rather worrying absence of a charging handle.

The PPSh-41 is the standard-issue submachine gun for Russian soldiers in-game; the Green Beret can use it as well. It always appears with 71-round drum magazines, and is called the "PPSH41". 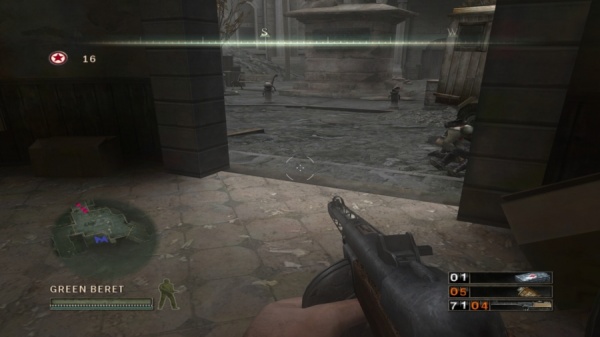 The PPSh-41 in the hands of the Green Beret during the last level. Note that, although the charging handle seems to be correctly locked backward, the bolt itself is erroneously in battery, despite the PPSh being an open-bolt weapon.

The rifles are the only weapons with usable iron sights in-game.

The Karabiner 98k appears as the "Mauser" in Strike Force, and is often used by German infantry. It has decent range and accuracy combined with high damage; its only drawbacks are its slow rate of fire and small magazine capacity (a correct 5 rounds). 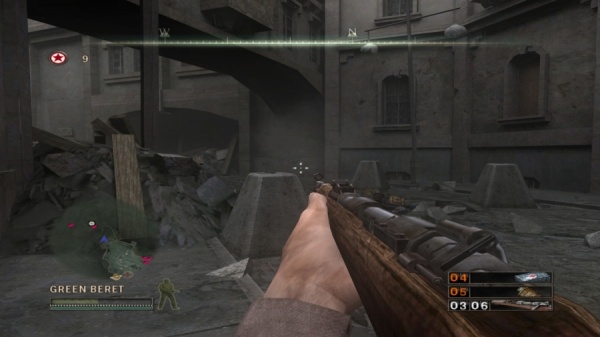 Amidst the rubble, the Green Beret holds his captured Kar98k. 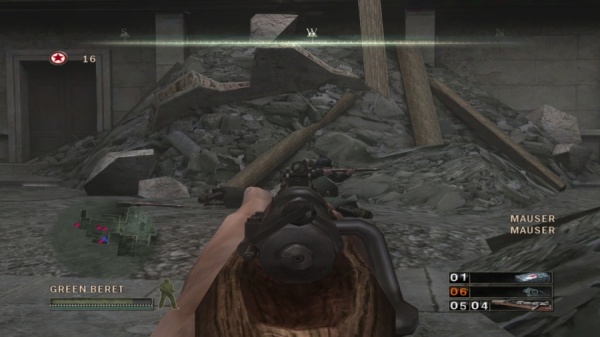 He then checks its iron sights, only to find that, much to his dismay, the weapon lacks a front sight post.

The M1 Garand can be seen in the hands of the Allied NPCs, and can be used by the Green Beret as well. It performs similarly to the Karabiner 98k, but holds 8 rounds instead of the Kar98k's 5, and has a higher fire rate (on account of it being semi-automatic, rather than bolt-action like the Kar98k). 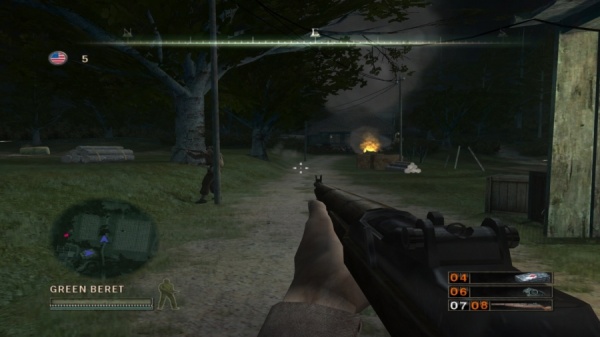 The Green Beret marches his way down a dusty trail, M1 Garand in tow. 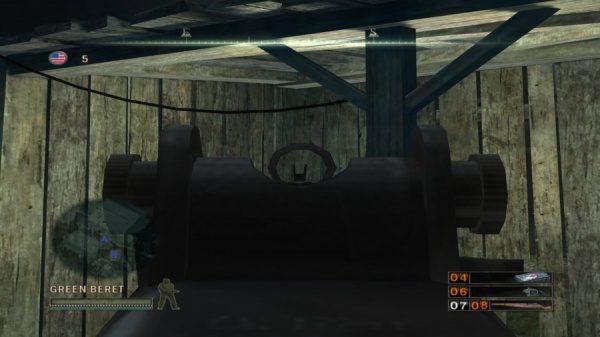 The M1903A4 Springfield is the Sniper's weapon of choice. 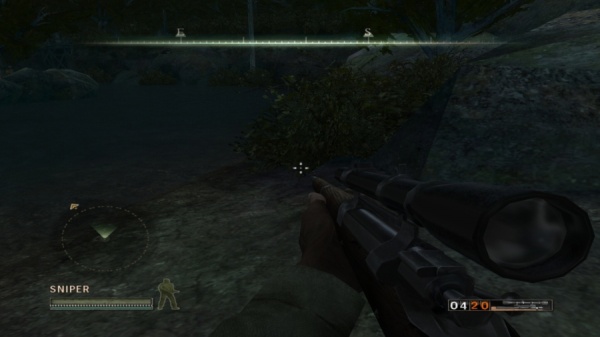 The Mosin-Nagant M91/30 appears during the Russian levels instead of the M1903 Springfield. In-game, it has the same attributes as the Springfield. 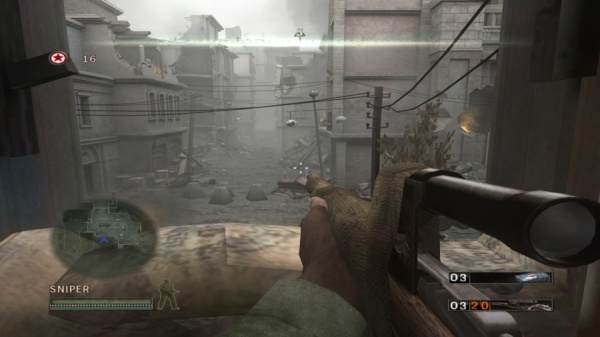 A camouflage-wrapped Mosin-Nagant in the hands of the Sniper, who watches intently for any enemies at the gates.

The Gewehr 43 is, oddly, the standard sniper rifle of the German army in-game, despite scoped Karabiner 98ks being both more common in and more suitable for this role in reality. It erroneously holds only 8 rounds per magazine in-game, rather than the correct 10. 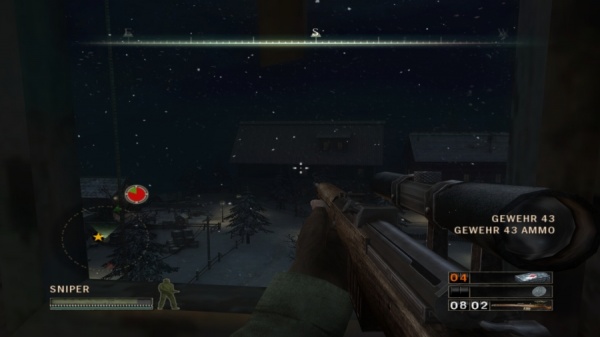 The Sniper looks out over a peaceful, snowy night with his G43.

The Browning Automatic Rifle appears in-game, as a Green Beret-exclusive weapon. In-game, it has a correct 20-round magazine, and its bipod is removed (as was rather common on M1918A2s, for the sake of reducing the weapon's weight). 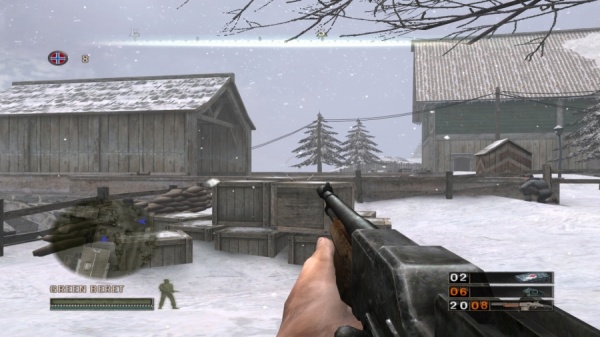 Amidst wooden crates and falling snow, the Green Beret ponders if he should've brought gloves.

The Maxim M1910/30 machine gun can be used during the game's last level to hold back German forces. It has unlimited ammo. 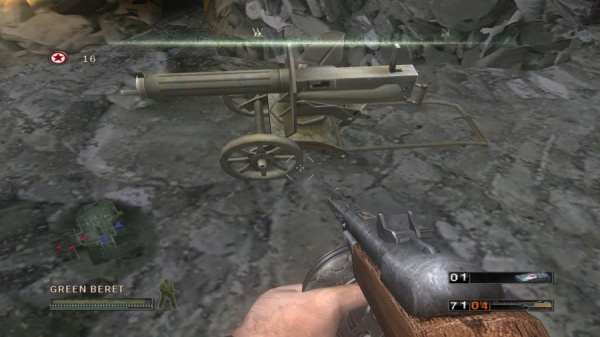 A Green Beret looks over the Maxim, pondering what he should use it for. 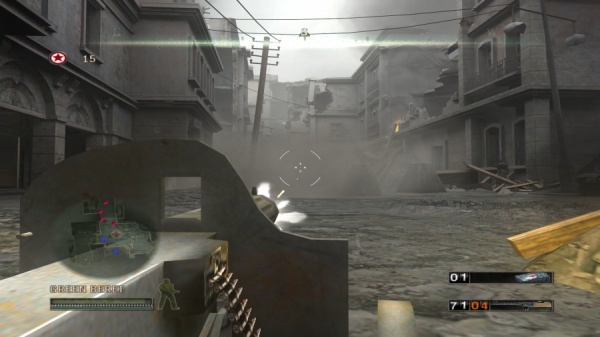 The obvious answer, of course, being to spray away blindly into large clouds of smoke. Obviously.

The MG42 can be used a stationary weapon in-game. It has unlimited ammo, just like the Maxim M1910/30 machine gun. 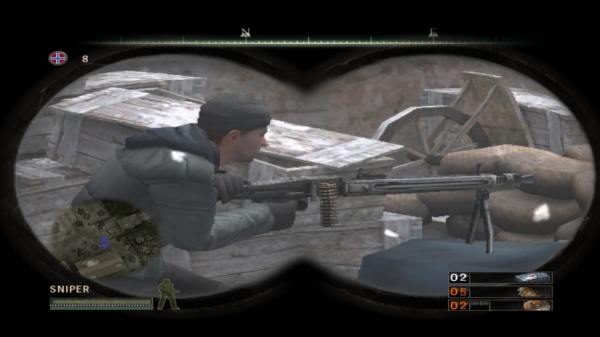 An Allied soldier operating a (presumably captured) MG42. Note the rather short ammo belt, which apparently contains an infinite amount of ammunition. 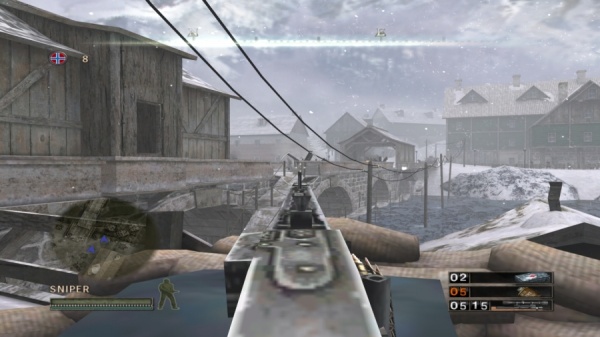 Later, upon finding one of his own, the Sniper decides to trade accuracy for volume of fire.

A Winchester Model 1897 shotgun in its riot-gun configuration appears as the "Winchester Riot" in Strike Force. It erroneously holds 8 shells instead of the correct 5+1 in-game. It is very effective in close quarters, but its reloading and pumping are both extremely slow. 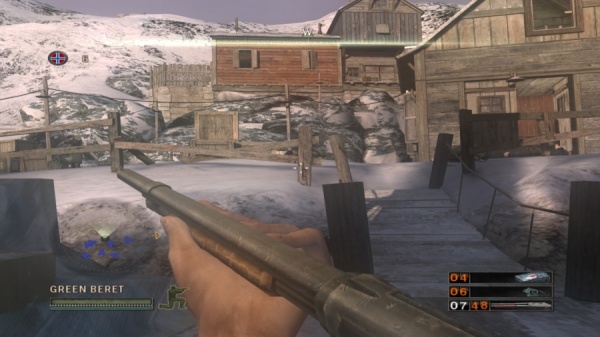 The Green Beret sprints through a snowy landscape, Winchester in paw.

The Mk 2 hand grenade is the game's resident frag grenade. It is useful for clearing out groups of enemies, but can very easily put an end to stealth missions.

The Panzerfaust is another option for clearing groups of enemies in-game, not to mention its usefulness against vehicles. However, it can only be used by the Green Beret. 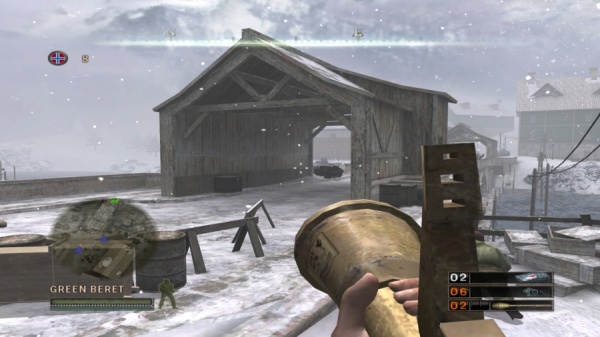 The Green Beret holds his Panzerfaust, debating whether he should save it, or attempt to use it to destroy a derelict barn.

An improvised explosive seemingly made of 3 sticks of dynamite, wrapped in cloth, and soaked with some form of adhesive. The sticky bomb can be used to destroy German Tiger tanks during the Panzers! mission. 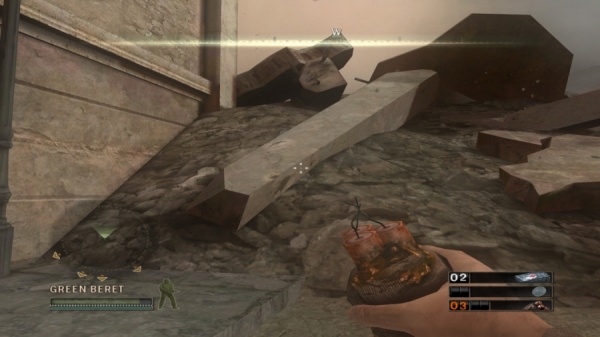 The Green Beret holds his improvised sticky bomb, lamenting the fact that he can't use it to clear rubble in-game.
Retrieved from "http://www.imfdb.org/index.php?title=Commandos:_Strike_Force&oldid=1131418"
Categories: