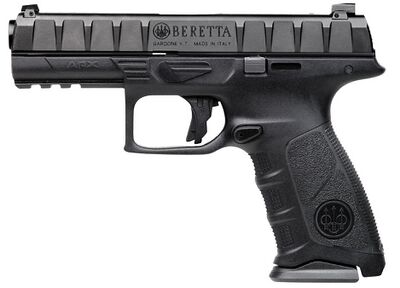 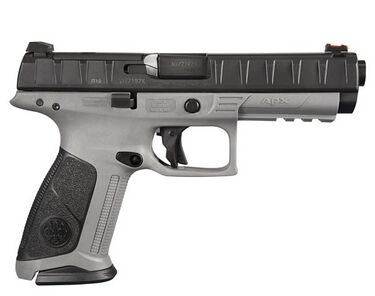 The Beretta APX is a striker-fired, semi-automatic pistol manufactured by Beretta. The APX was initially designed in 2016 after five years of development for the U.S. Military's XM17 Modular Handgun System competition, however the APX did not secure the winning contract. The APX features a black steel slide and an interchangeable railed polymer frame that is available in black, desert tan, shadow wolf grey or olive drab green. Unlike the Beretta 92 pistol series, the Beretta Cougar or the Beretta Px4 Storm, the APX features a breech block cammed into engagement with the slide, in the same manner as was first seen on the SIG-Sauer P220 pistol series.

The APX series has numerous variants, including the Centurion (a shorter slide and barrel on a near-full sized frame), the Compact (the Centurion slide and barrel on a subcompact frame) the Target (long-slide competition variant with improved trigger, sights and barrel), the Combat (regular model with threaded barrel and optic mount) and the Carry (a Beretta Nano with some design changes to fit into the APX family).

The APX features a loaded chamber indicator on the rear of the slide and a striker deactivation button that allows decocking before the gun can be field-stripped. The trigger mechanism features a drop safety and an automatic striker block safety. An ambidextrous frame-mounted manual safety is available on demand as a factory extra. The core of the system is a stainless steel chassis which allows true modular reconfiguration. Grip backstraps are also interchangeable.

The Beretta APX and variants can be seen in the following films, television series, video games, and anime used by the following actors: