Bear Island is a 1979 adventure movie directed by Don Sharp and based on the novel by Alistair MacLean (Puppet on a Chain). An international meteorological expedition works on the Bear Island in the Arctic Ocean. But in reality, several members of the expedition are searching for a sunken German U-boat with a shipment of gold.

The following weapons were used in the film Bear Island:

Walther P38 pistols are carried by Heyter (Michael J. Reynolds) and Jungbeck (Nicholas Cortland). During the movie their pistols passes to another hands including Frank Lansing (Donald Sutherland) and Paul Hartman (Lawrence Dane).

Jungbeck holds a P38 during the case on snowmobiles.

Another view at the pistol, held by Hartman.

A close view at the muzzle.

Hartman finds out that he has only one shot left.

In the final scene Otto Gerran (Richard Widmark) uses a snub nose revolver that is supposed to be a Smith & Wesson Model 36.

Otto Gerran draws his revolver that was hidden among the books.

The opened cylinder is seen.

Gerran threatens Hartman with his revolver.

An M8 flare pistol is used by Frank Lansing (Donald Sutherland) in the final scene. 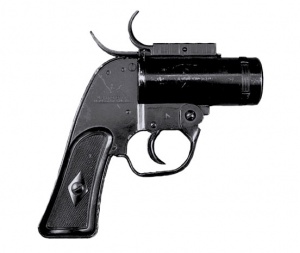 An M8 flare pistol is seen in the wheelhouse.

A Winchester Model 70 with sniper scope is the only rifle of the expedition. It is seen in hands of several characters including Lechinski (Christopher Lee) and Frank Lansing (Donald Sutherland).

Another close view at the rifle.

Lechinski with his rifle and Smithy (Lloyd Bridges) with his pistol in a standout.

Lansing finds out that the rifle isn't loaded.
Retrieved from "http://www.imfdb.org/index.php?title=Bear_Island&oldid=1414275"
Categories: