Angelique and the King

Angelique and the King (original title: Angélique et le roy) is a 1966 historical adventure film, based on the novel of the same name by Anne and Serge Golon and directed by Bernard Borderie. Starring Michèle Mercier and Robert Hossein.

The following weapons were used in the film Angelique and the King:

The characters in this movie use the anachronistic Chatellerault Cavalry Model 1822 percussion pistol. 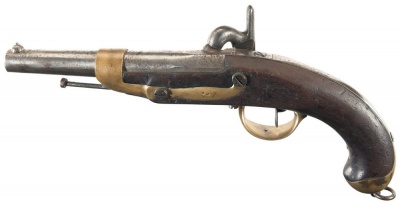 The preacher of the black mass killed dwarf Barcarolle by gunshot from ...

Angélique (Michèle Mercier) on a long journey is equipped with a pistol.