Angelique (original title: Angélique, marquise des anges) is a 1964 historical adventure film, based on the novel of the same name by Anne and Serge Golon and directed by Bernard Borderie. Starring Michèle Mercier and Robert Hossein.

The following weapons were used in the film Angelique:

Several characters in the film use a Flintlock pistol.

Philippe de Plessis-Bellieres (Claude Giraud) fired at the bandit before a castle.

A bunch of Parisian underworld ...

... and their chief Calembredaine (Giuliano Gemma) with a flintlock pistol on his belt.

An officer of gendarmes aims his gun at Angelique ...

... but Calembredaine´s bunch surround him.

One of bandits before a castle (right) is armed with a anachronistic Chatellerault Cavalry Model 1822 percussion pistol. 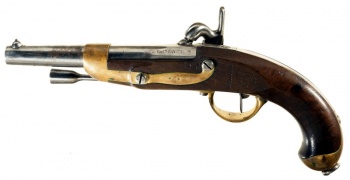 A squire distributes muskets the defenders of the castle.

Nicolas (Giuliano Gemma) with the musket on the wall.

A bandit fired a flintlock musket.

The gendarmes in the background are armed with muskets.