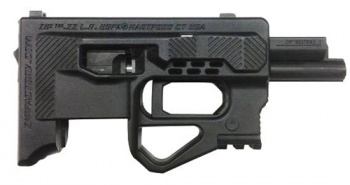 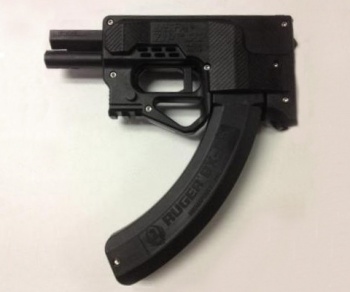 The USFA ZiP .22 is a semi-automatic straight blowback bullpup pistol chambered for the .22 Long Rifle cartridge. It uses Ruger 10/22 magazines. Commercially introduced by the U.S. Fire Arms Manufacturing Company (USFA) in 2013, the ZiP .22 was an attempt to make a very cheap, easy to manufacture, extremely safe firearm. Although given some praise for its innovative concept, affordability and accuracy, it was widely panned for its frequent mechanical malfunctions, with failures to feed ammunition and eject spent casings (due to the lack of extractor, the incredibly short bolt travel, and the incredibly high bolt velocity) being reported by a large number of shooters. It would also eject cases very close to the shooter's finger if they were right-handed, which could result in minor injury. The poor reliability of this gun made it a commercial failure, despite the ~$100 price tag, causing the eventual demise of USFA as a company in 2017.

The weapon was marketed with various accessories, such as an SBR conversion kit, the BattleZiP Survival SBR, which was intended to turn the pistol into a "survival gun" with compartments for emergency supplies, as well as various top covers, including one with a Picatinny rail (which would've been used to attach the stock) and an underbarrel mount for rifles, allowing you to use it as an emergency backup weapon when reloading the rifle. There was also a .22 Winchester Magnum Rimfire conversion kit named the ZiPSSE (Single Shot Express). The SBR kit never got made, but the top covers and .22 WMR conversion kit were sold through Amazon.

The USFA ZiP .22 and variants can be seen in the following films, television series, video games, and anime used by the following actors: